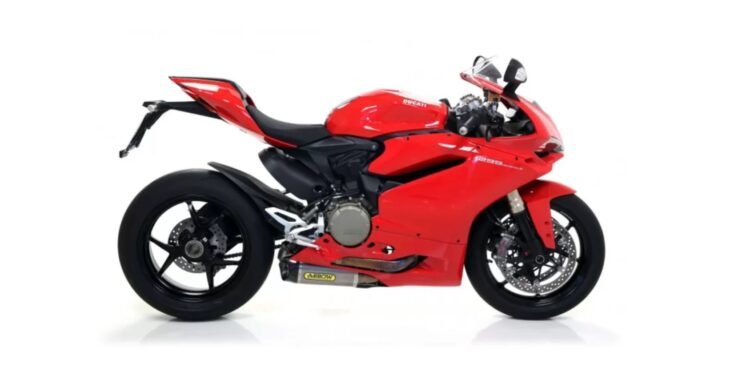 The Ducati 1299 Panigale is pretty much the same motorcycle though is packaged with a larger 1285 cc L-Twin variant of the 1199 engine while also having an updated and more sophisticated electronics package with some styling tweaks.

Unlike the 1199 Panigale the 1285 cc 1299 is not eligible for WorldSBK due to being 86 cc over the required engine capacity for 2-cylinder motorcycles which is under 1200 cc.

The 1299 is 10 horsepower up on the 1199 which claimed 195 horsepower at the crank producing an incredible claimed 205 hp at 10,500 rpm and the same 166 kg dry weight that ensured a record-breaking power-to-weight ratio that puts the 1299 Panigale ahead of all other Superbikes of its time and any Hypercar you can realistically buy for that matter.

On paper, the 1299 really does make a statement and promises a lot. 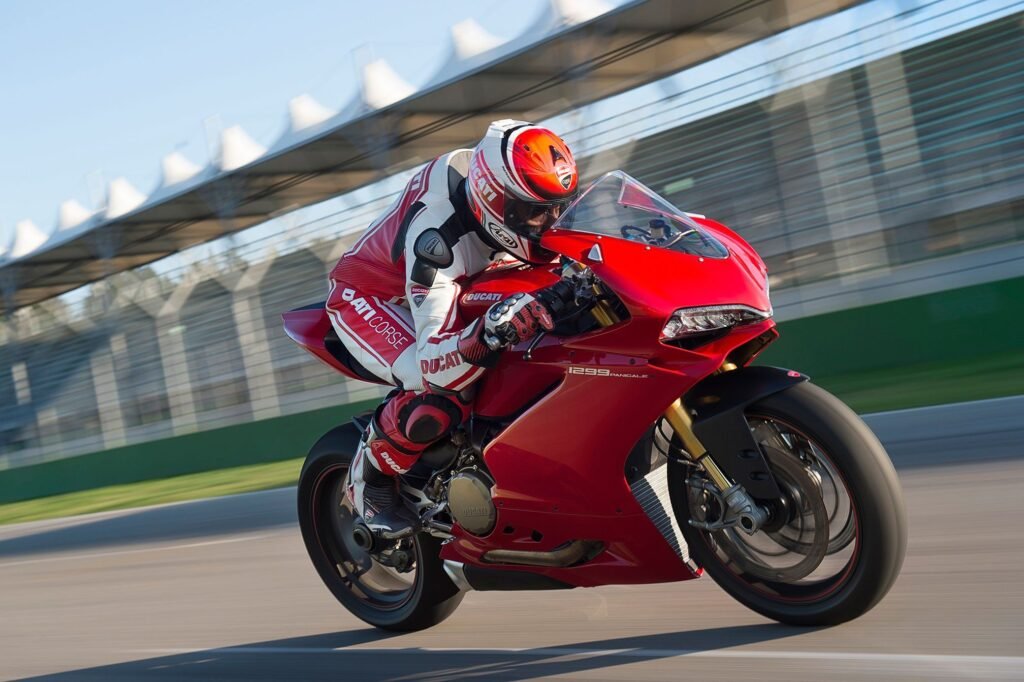 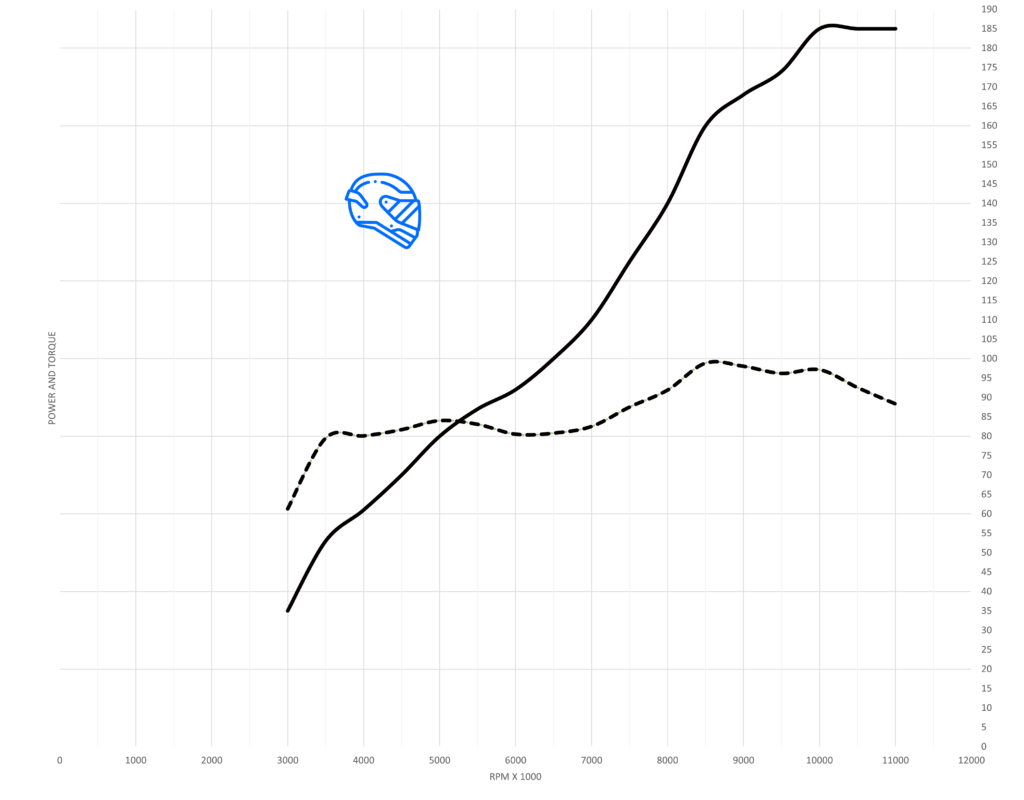 Ducati and its L-Twin engine have come a long way from its late 80s origins that powered the legendary Ducati 851 series.

Many incarnations later we end up with an amazing 1285 cc short-stroke behemoth pushing out more than 180 horsepower at the wheels.

The Ducati’s 1199 which was the outgoing model the 1299 replaced despite being a large 1199 cc L-Twin engine was often criticized for its somewhat gutless (by L-Twin) standards midrange acceleration.

In isolation you would never have called it a ‘gutless’ you would have noticed the contrast in ‘drive’ comparatively right where it matters between 4500 and 6500 rpm.

But once you get past that 6500 rpm threshold the engine would come on exceptionally strong – with an almost 500 cc Grand Prix two-stroke hit in a wheelie frenzied burst acceleration.

Inadvertently this character ensured that the bottom end felt pretty lethargic comparatively as the top was so strong compounding the gutless feeling.

Traditionally big piston L-twins with their long stroke motors made loads of low and midrange torque at the cost of the top end. 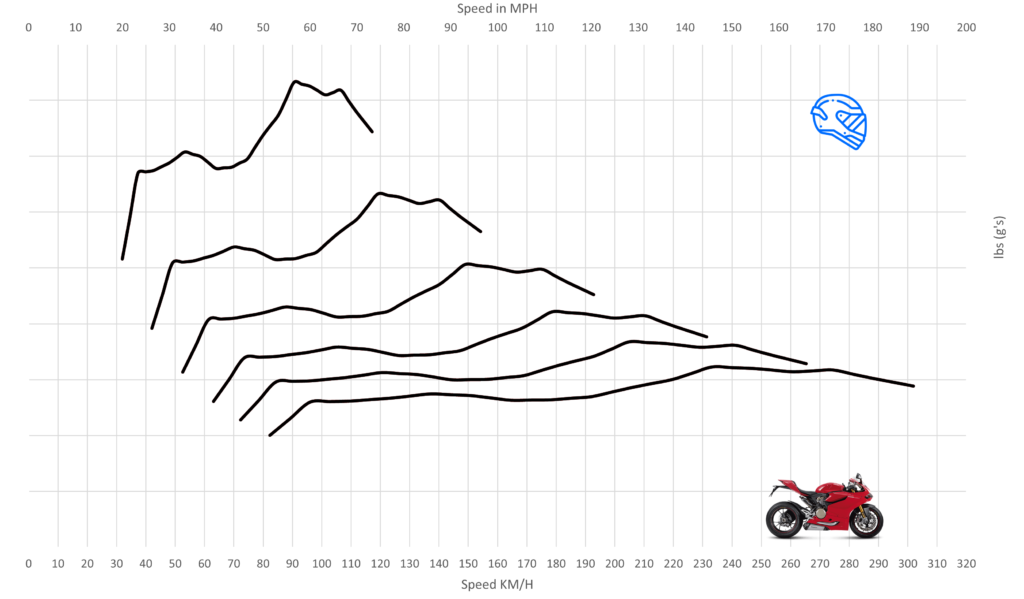 That typical strong bottom and midrange were often complimented by low gearing in the first three gears comparatively to four-cylinder motorcycles of a similar capacity/class.

Ducati’s 1199 due to chasing those big peak power numbers that many of the Japanese fours were claiming, the Bologna firm had to design an engine that revved and produced its peak power a little higher than a typical large capacity L-Twin.

Though to achieve this Ducati designed an 1199 cc L-twin engine with an extremely short-stroke over square design with an insane 112 mm × 60.8 mm bore and stroke.

This meant the big 600 cc pistons had to get spinning before they really came on song. This lack of low-end was also exemplified by stringent emissions laws also but could be remedied to a large degree by flashing the ECU or opting for a custom dyno tune complemented with a Decat Exhaust System. 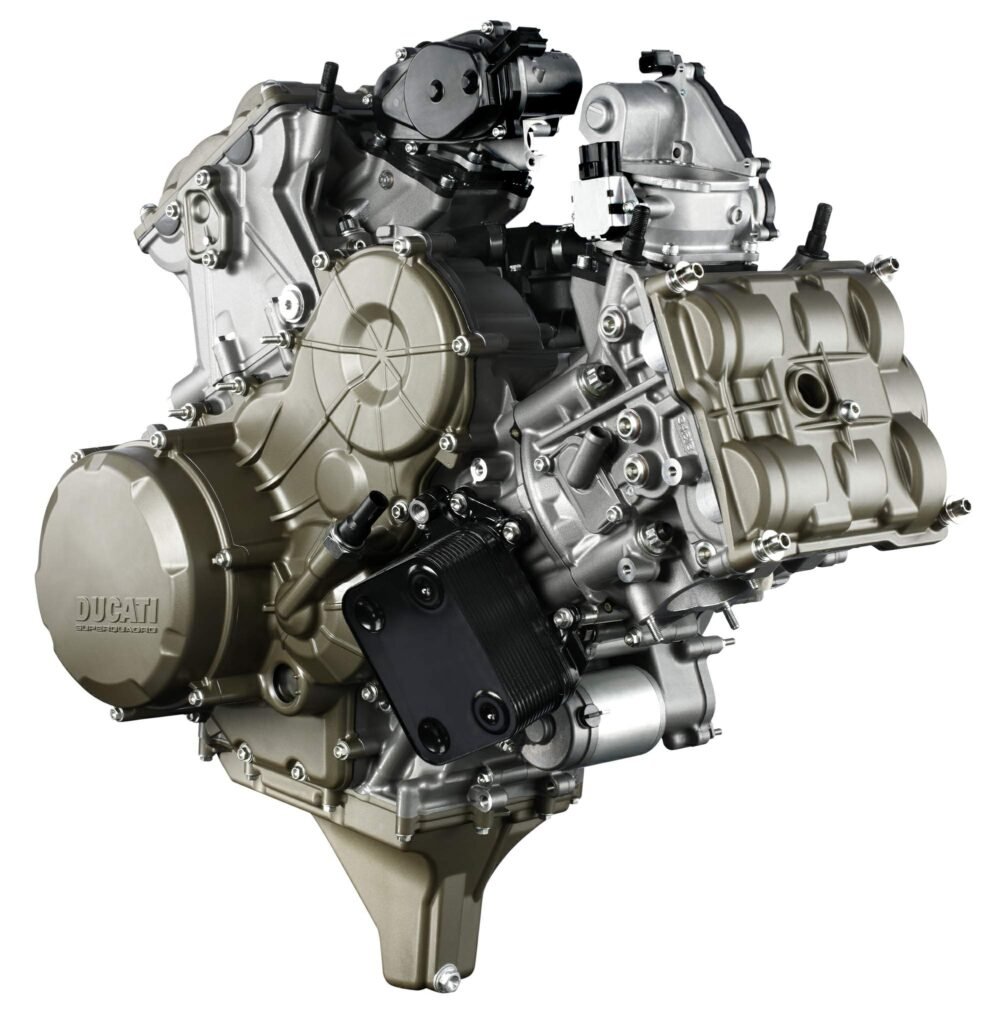 While the new Panigale motor still had that 2-stroke character it was quite as pronounced as the 1199 as power and torque holes were filled in a little comparatively resulting in the 1299 being a much more capable machine if driving from lower in the rpm range which meant that it was not so gear dependent. 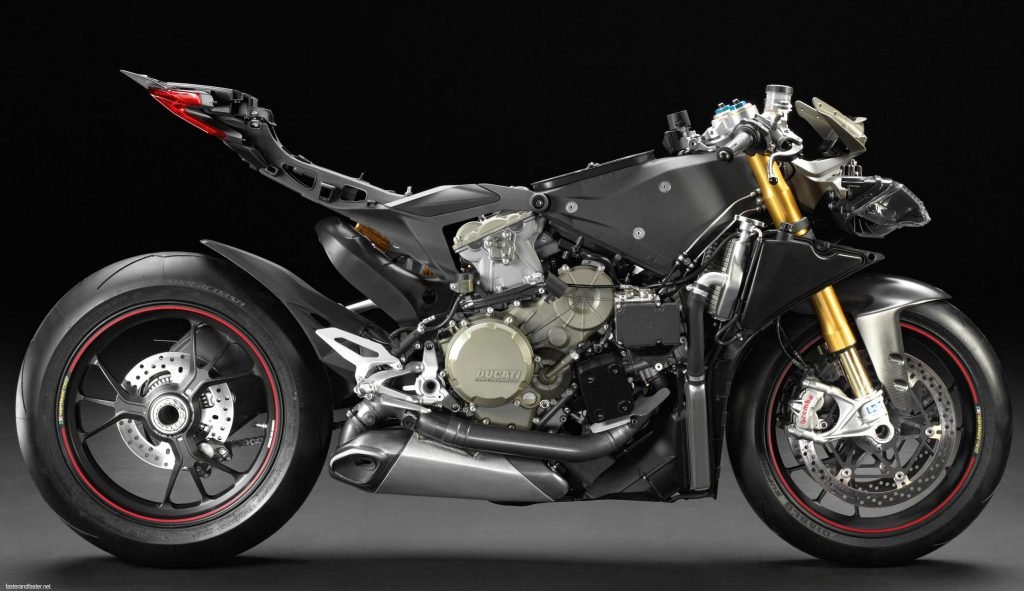 As you can see from our Panigale 1299 Dyno Chart, the engine’s output is stunning and peaking at 185 horsepower at a little of 10,000 rpm.

As said, the engine still has that two-stroke style rush of power and torque as the curve climbs past 7,000 rpm and really eats gears faster than you can feed them. In many ways, it has a similar engine character to the current Yamaha YZF-R1 albeit compressed over a narrower rpm range.

Remember the days when a 998 and its 120 bhp at the wheels was something to be in awe of? Well, the Panigale 1299 makes that power at only 7500 rpm and continues to produce an additional 65 hp only a couple of thousand rpm later.

In the real world, the engine is fantastic, and you can be much lazier with gear changes compared to the 1199 as it will just drive effortlessly to silly speeds from any gear at any speed.

Due to noise and emissions restrictions you can bet that in the first few gears you are not actually getting all that the engine can deliver but even then it is almost too much as stock, In the upper gears as they are longer than your typical 100 cc motorcycle roll-on acceleration would be comparable at highway speeds but if you got 6th chugging away at 40 mph many of the 1000 cc inline 4s would have the edge.

Ducati’s are ballistic but typically lose out in the higher gears.

This is still the case with the Panigale 1299 but it is barely noticeable and only really loses out to the faster of its rivals at 170 mph and above, which is irrelevant in 99.9% of situations and would amount to five bike lengths at a track with a long straight such as Mugello.

The top speed is 187 mph though the Ducati could certainly hit its limiter in top gear at a little over 190 mph giving better protection for taller riders.

The 1299 is capable of sub ten second quarter mile times but wheelies and a low first gear makes it extremely difficult to launch effectively, though once in its stride it certainly makes up for the not-so-optimal start from a dig.

I thought the current 2015 Yamaha R1 was a wheelie machine when trying to get the best of it from a dig but the 1299 has it beat in that respect.

The 1299 is such a small motorcycle that is the lightest in class with monstrous power and torque which means that it is not the best drag bike out there.

In the first three gears the 1299  just wants to loop and only really settles down in 4th but still, a crest will have the wheel lifting.

Like with most modern liter bikes with wheelie and traction control, if you are an average rider you may be more consistent with your ETs if you have them set to their respective optimum levels but for the very best times, they are better off, though you really need a heap more attempts to nail that perfect launch and get all of your shifts just right. 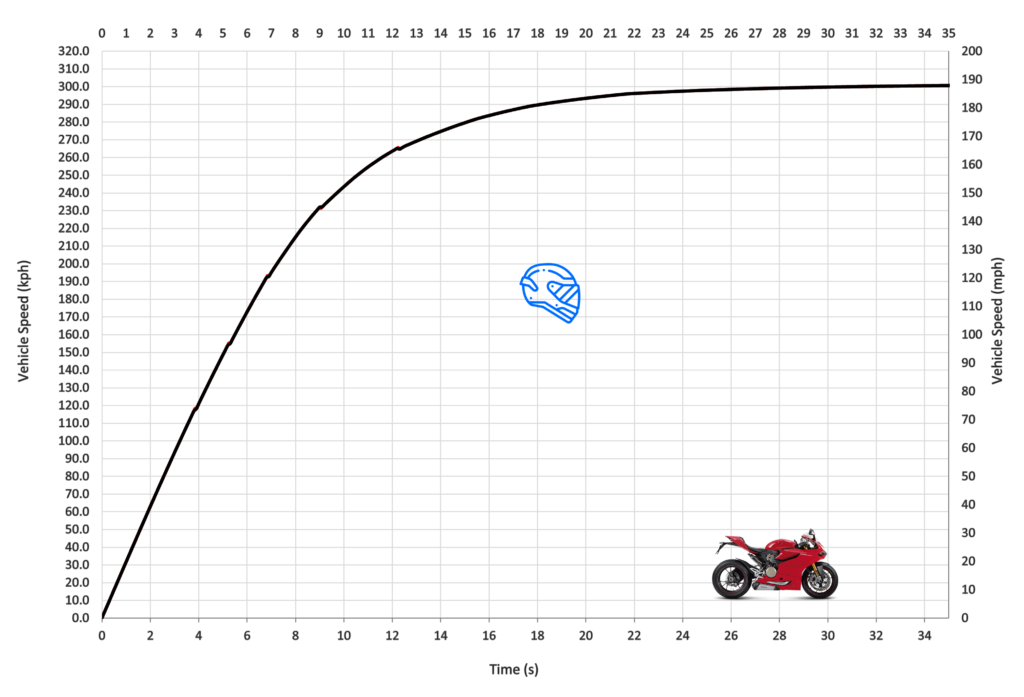