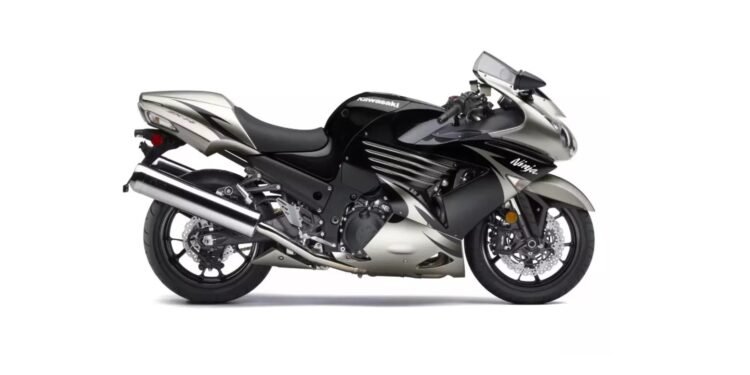 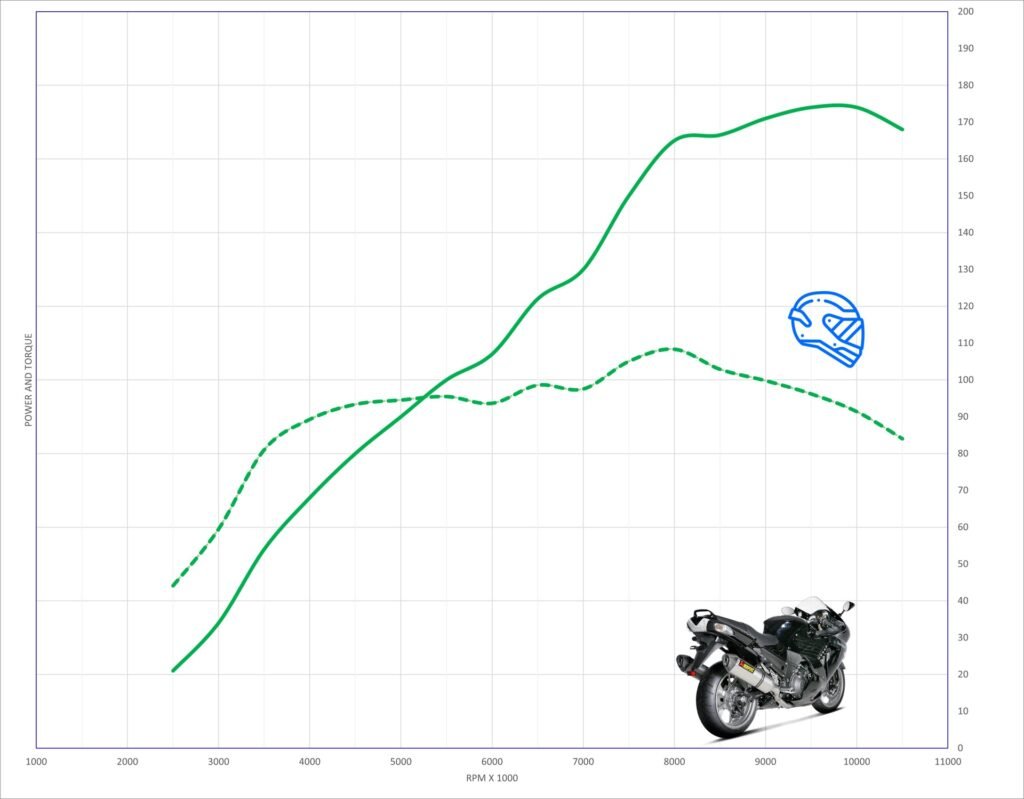 The ZX-14R engine at the time was the most powerful production motorcycle in the world and produces 174 horsepower at the rear wheels at 9800 rpm.

Peak torque for the ZX-14R is equally impressive at 108 ft/lb at 8000 rpm. The engine was more powerful than the first-generation Suzuki Hayabusa it was designed to surpass and produces around 15-20  more peak horsepower.

The engine is extraordinarily strong almost everywhere providing exceptionally good drive throughout the rpm range courtesy of its huge displacement and torque. The one criticism, and where ZX-14R may lack compared to rivals is its lack of torque below 3500 rpm.

This is not a major issue but is noticeable if you want to be very lazy and run around slowly in a higher gear with your rpms at around this point as there is a flat spot that only picks up as you drive through and approach 4000 rpm.

This lack of torque can be easily remedied with a pipe and tune. 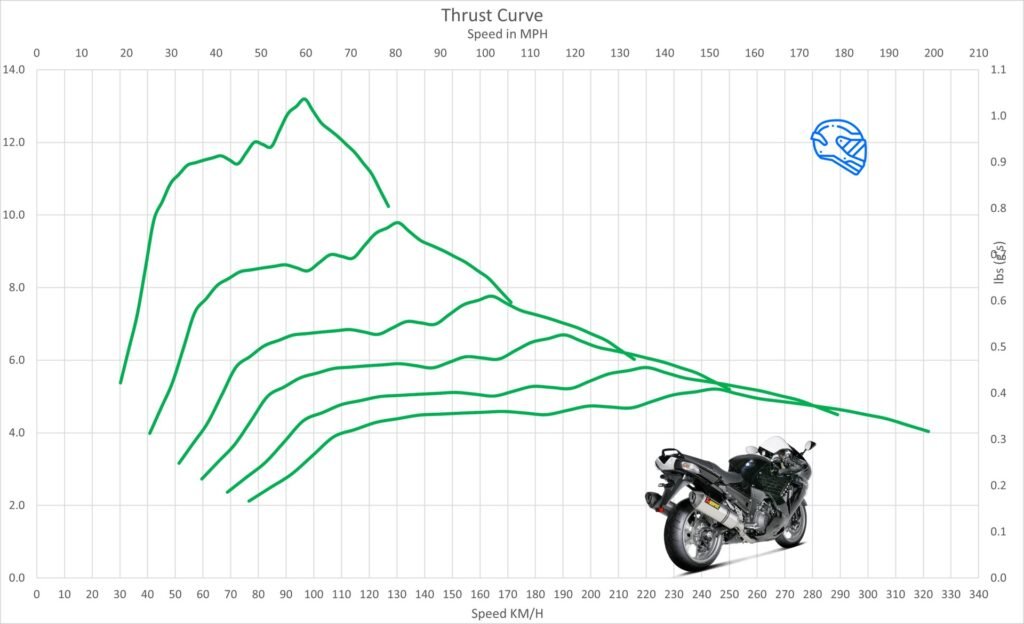 Despite this minor issue, there are not many engines that can accelerate so fast with so little rpm showing. Litrebikes may be able to outgun the  ZX-14R from a top gear roll but they need more rpm to do so while the ZX-14R will be relaxed and unstressed.

Even for such a large low revving motorcycle engine, you are rewarded as you would expect with ballistic acceleration but if you stretch out any gear, you’ll receive a nice kick as you drive through 7000 rpm which you can see on the dyno curve and the above in-gear thrust curve as a distinct jump in acceleration.

The old ZX-12R was similar albeit not as brutal as the ZX-14R. Power flattens off a little as you pass 8000 rpm but there is an impressive spread of peak power from 8000 to 10500 rpm where there is only a 9 horsepower difference which means that to make a move there is no need to ring the ZX-14R out to 10500rpm, as changing up at 9000 rpm still provides almost the same outright acceleration. 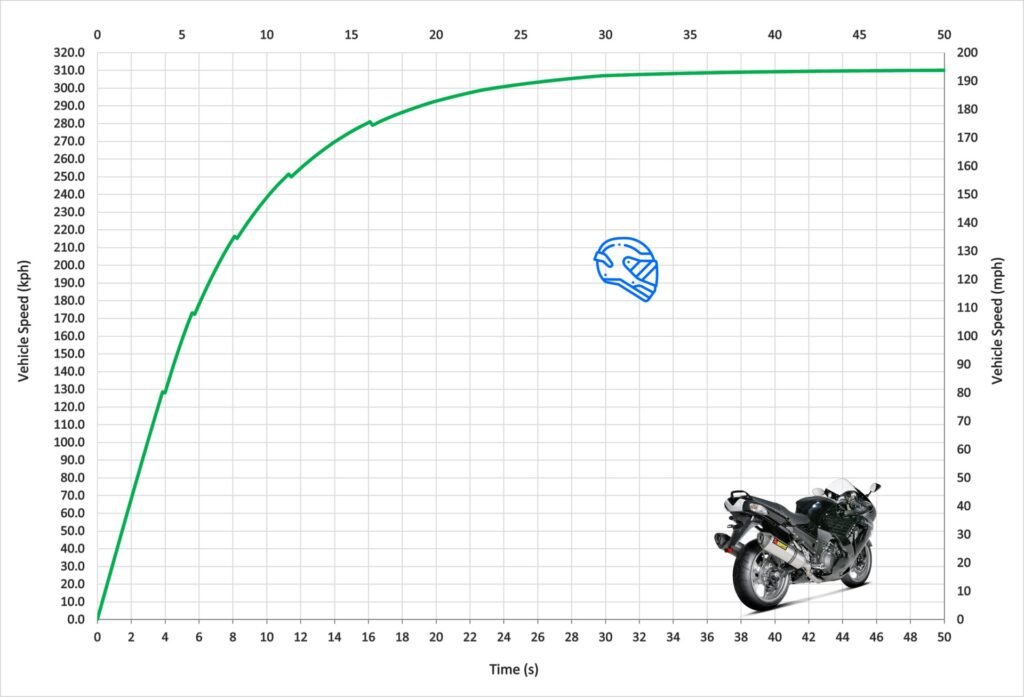 The ZX-14R reclaimed the top speed crown from the Hayabusa and out accelerated it too once moving thanks to its extra power.  0-60 mph for ZX-14R unsurprisingly was under 3 seconds at 2.85 seconds and 0-100 mph in 5.11 seconds. Cracking the sub 5 seconds 0-100 mph time while possible was difficult considering the ZX-14R’s rowdy nature and willingness to spin its rear tyre.

The 0-200 km/h time which is a common Supercar benchmark is achieved in only 7.11 seconds. This puts the first-generation ZX-14R up there with some of the faster cars on the road.  The 0-400m quarter mile time is cracked in 9.99 seconds at 148 mph

If you hold out sixth gear for long enough the ZX-14R will go onto a top speed of 195 mph after around 35 seconds.