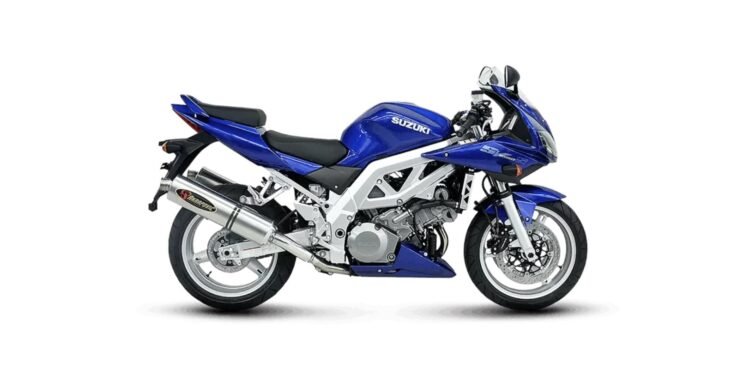 A look at the Suzuki SV1000S’ engine performance, top speed and acceleration 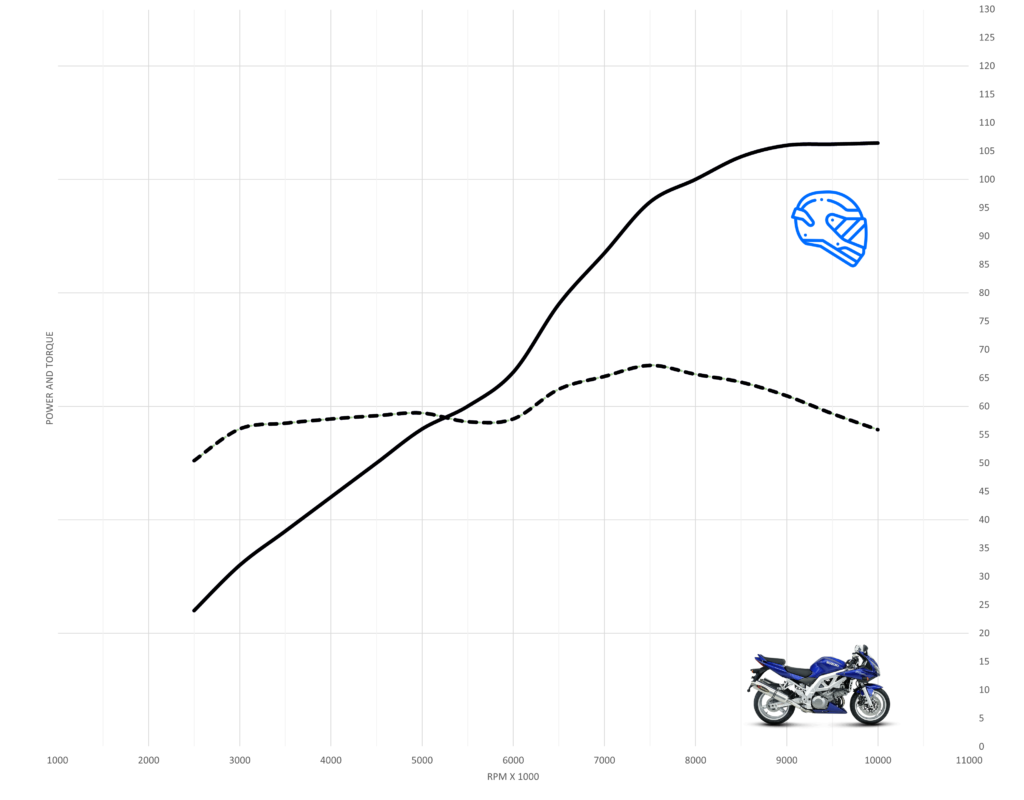 The SV1000 is powered by the same engine as Suzuki’s TL1000S, a bike that is very similar to the SV but is more powerful, aggressive, and sporty.

The 996 cc L2 in the SV1000 is a little toned down compared to the TLS after various engine updates and changes that resulted in a more linear power delivery and softer throttle response with less peak power and torque.

The surge at 6000 rpm is not felt on the road quite like the dyno graph would suggest, instead acceleration builds linearly and strongly right up to peak power. 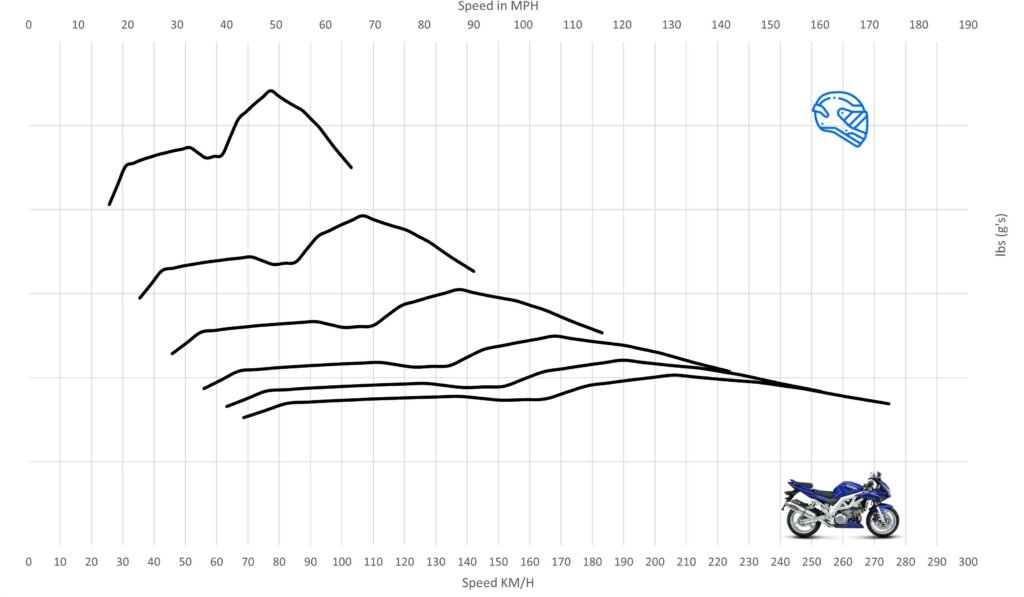 The engine is strong and effective on the road, especially in the first three gears and will wheelie in first off of the power alone from as little as 4000 rpm if you crack it open aggressively.

Like many large-capacity L2s, fourth to sixth gears tend to be longer compared to rival four-cylinder motorcycles.

This is generally the case because the four-cylinder rivals tend to rev higher and can get away with running lower gearing without sacrificing top speed.

As a result, roll-on acceleration is not as impressive as it could be in the higher gears.

The SV1000 has a lower overall ratio due to the final drive having two extra teeth on the rear sprocket.

A lower fourth, fifth and sixth would provide much better in-gear performance without sacrificing top speed – seeing as the SV1000 does not have the power or the aero to hit theoretical top speed in fifth let alone sixth.

It will pick up and overtake slow-moving traffic easily but there are 600 cc sportsbike that have more acceleration in sixth gear from the same speed despite having much less torque.

The SV1000’s fifth gear is a better option if you want to get an overtake done fast and safe.

While you can be lazy with the SV1000 and not be too concerned about what gear you find yourself in, like the TL, The SV does like to be thrashed and rewards you the more rpm you chase, which is unlike some other L2s of the era that tends to run out of puff beyond 7000 rpm.

You can consider the SV1000 as a flexible engine, but if you really must get a move on the sweet spot for the SV1000 is between 7000 and 10,000 rpm, this is particularly the case in the higher gears though you’d have to be ‘on it’ and pushing on hard if above 7000 rpm in fourth gear and above. 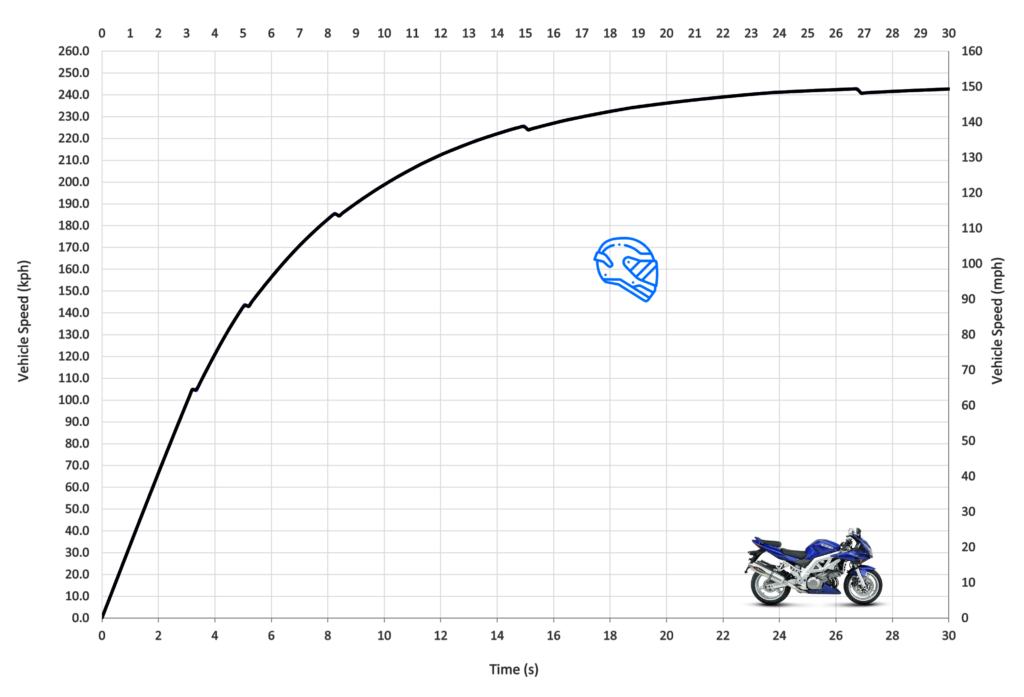 Of course, it was a little slower than the TL1000S too but still impressed on the strip and was only a fraction behind when pushed came to shove.

From a dig, thanks to great fuelling and a clutch that provided exceptional feel, the SV1000 is very capable on launch. It will easily wheelie through first gear but less so than the shorter wheelbase and more aggressive TL1000S.

First gear is low and without much effort, the SV1000 can hit 0-60mph in 2.93 seconds and 0-100 km/h in 3.04 seconds. These are ETs that can match or beat many of the current Superbikes that boast almost twice the power.

This is possible as these Superbikes tend to have too much power and are too light with very short wheelbases which are not conducive to optimum launches despite their rider aids being there to help keep things under control.

With 60 mph despatched so quickly the ton comes up not long after, which is helped by the SV’s very slick, fast, and precise gearbox changes. A gearbox that stands out to this day!

Halfway through third gear and the 0-100 mph benchmark arrives in only 6.30 seconds which is a time that would embarrass many Sportscars and Supercars.

The SV1000S for most competent riders would be a low eleven-second bike at the strip but if you are light and really know what you are doing the SV1000S will chime in with a quarter mile time of 10.88 seconds at 125 mph.

The above is a great time for a twenty-year-old L2 making under 110 horsepower at wheels and is pretty much as fast as the fastest 600 cc Supersport motorcycles that make similar if not more power and are 20kg lighter.

The faster of the Supersport motorcycles will have the edge in acceleration from 130 mph and right up top due to more effective gearing and efficient aerodynamics though the SV1000, despite being semi faired still goes well up top. Perhaps this is due to the slenderness of its L2 engine plus the very effective half-fairing that provided the rider with some good cover from the elements.

With the above in mind, the SV1000 will hit a real 152 mph with around 170 mph showing on the very optimistic speedometer.