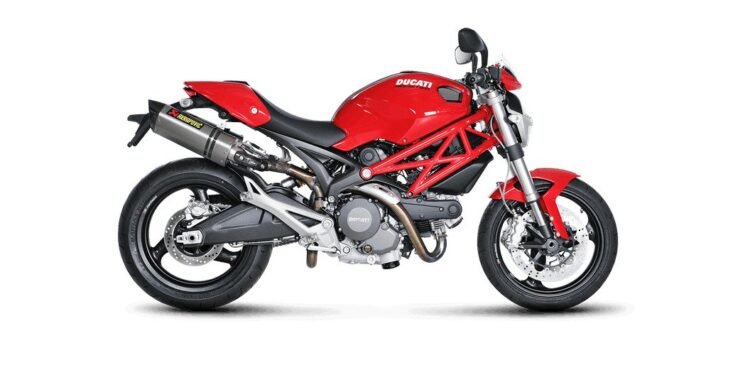 Ducati’s Monster 696 is one of many Ducati Monster’s past and present and is a naked motorcycle that competes in the entry level to mid naked class alongside other motorcycle such as the MT-07 and CB650R.

Below, we take a look at the Ducati Monster 696’s Dyno curves, in-gear and outright acceleration through the gears, and finally the 696’s top speed. 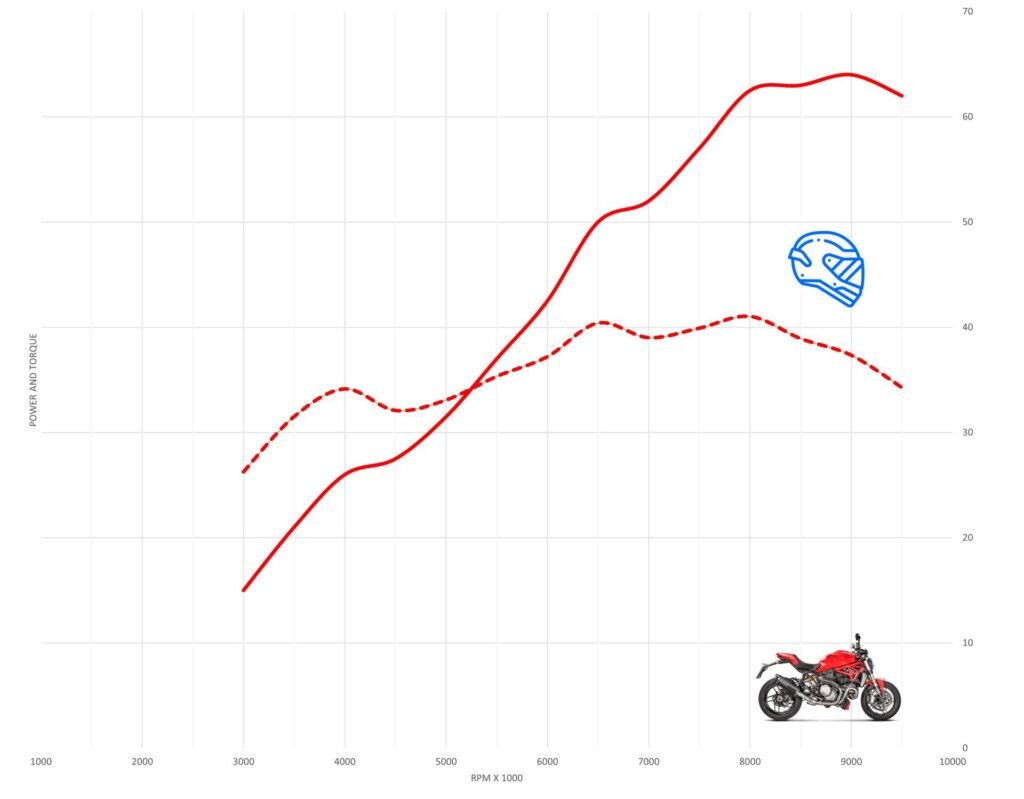 Powered by a 696 cc air-cooled L2 twin, the Monster 696 does not set the world on fire with its peak output but offers up competitive numbers for the class.

Claimed power is 80 horsepower at 9000 rpm and 50 ft/lb at 7750 rpm though at the rear wheel it disappoints slightly versus the claimed figures.

Typically motorcycles lose around 10% power through transmission losses though the Ducati 699 makes a little bit less than expected at 64 horsepower at 9000 rpm and42 ft/lb at 8000 rpm.

New Ducati Monsters have become much smoother with more linear power curves, but the Monster 696 has quite a few peaks and troughs and a flat sport after 4000 rpm that is noticeable on the road and right where you need it. 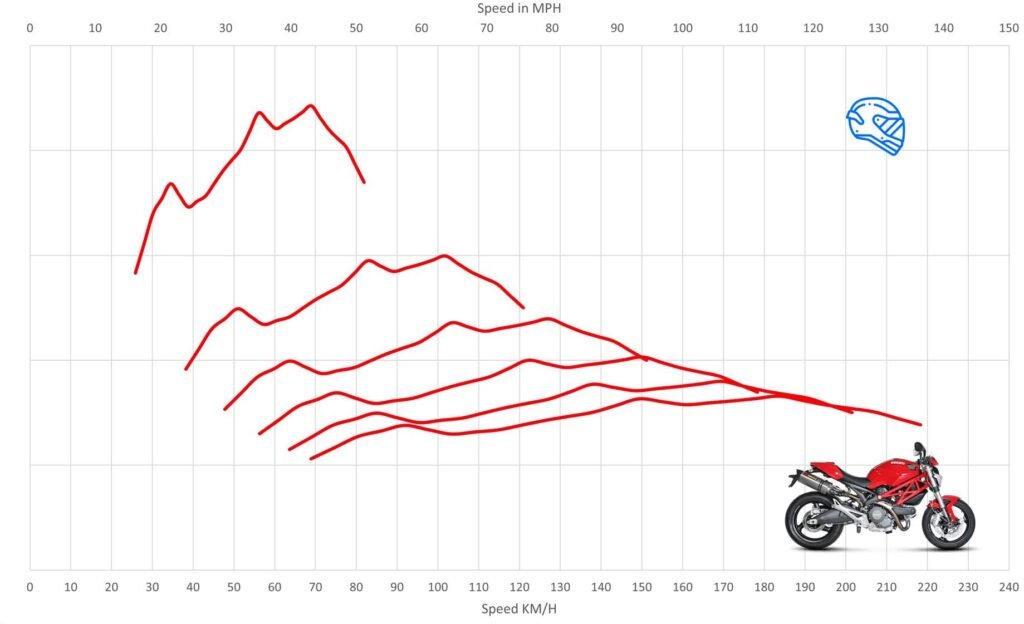 The engine does recover and pick up well after and drives with enthusiasm as it approaches and passes the 6000 rpm mark. It’s at this point there is another little flat spot that is also noticeable but is passed very quickly as the Monster 696 drives up to 9500 rpm.

If you look at the thrust curve the flat spot that starts a little after 4000 rpm in top gear is around 60 mph and is right where you may find yourself when wanting to overtake slower moving traffic.

So, kicking it down a gear is advisable as it takes until around 70-80 mph before it provides better acceleration. 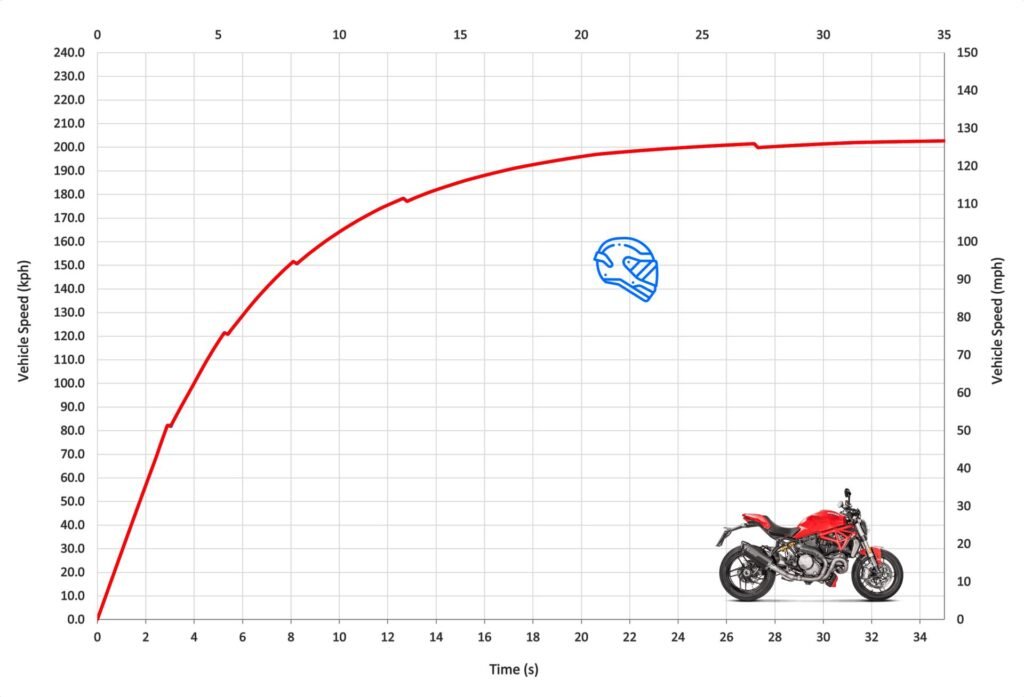 The Ducati Monster 696 moves well considering that it has only 64 horsepower. It is helped by its relatively light dry weight of 165 kilograms which ensures that it is nippy from a dig recording a 0-60 mph time of only 3.81 seconds.

This equates to 0-100 km/h for the monster 696 at 3.99 seconds. Unfortunately, the 696 Monster requires second gear to hit each speed so could be a little quicker if a gear change was not required.

The monster 696 needs to be revved right up to the limiter in the first three gears for the best effect and a change into fourth at around 9000 rpm for the fasters 0-100 mph time which the Monster 696 achieves in under ten seconds at a respectable 9.52 which matches the Ninja 650 almost exactly.

Almost at the end of fourth gear, the Monster 696 will pass through the quarter mile in 12.30 seconds at 109.9 mph making it around mid-pack of the very many motorcycles in the class.

Being a naked motorcycle top speed is not where it is at but hold on long enough and tuck good and you will eventually clock a very decent and respectable 126.8 mph from the Monster 696 and can be almost done in fifth though it is right at the limiter.

The Monster 696 offers good acceleration both outright and in-gear but is let down a little by the two flat spots in the power and torque curve. This can be remedied easily though with an exhaust and tune which is something most do.