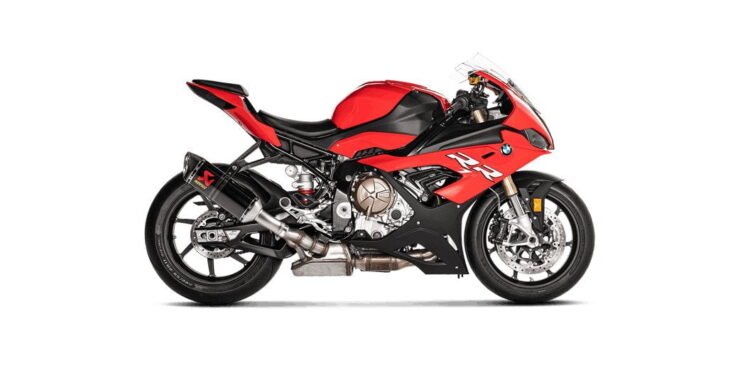 From when the S1000RR was first released back in 2010 it has pretty much led the litrebike class on the road up until now and has arguably been the best 1000 cc Superbike period.

Combining class leading power, comfort and usability wrapped in an amazing package has meant that the S1000RR has been pretty much first choice for most riders wanting the ultimate Superbike.

You can read a little bit more Here  about the original S1000RR and see how it performs against the clock.

In terms of engine performance, the S1000RR pretty much dominated the other 1000 cc bikes from the moment it was released and right up until the Japanese finally got their acts together and put out motorcycles that could trade blows on the Dyno and in a straight line with the ballistic S1000RR.

The S1000RR’s development did not stay static from release as it saw various updates that came in the shape of engine, chassis, electronics and styling updates starting from 2012, 2015 and 2017 to ensure to that S1000RR remained ahead of it competitors.

We also did see the introduction of the HP4 homologation special in 2012 which is a motorcycle that was a more track focused S1000RR meant for WSBK racing.  There were also some minor updates for the HP4 in 2013 too.

Kawasaki were the first to respond to the S1000RR by throwing a firm left-hook after announcing their 197 crank horsepower 2011 ZX-10R.

The Japanese were a little quite for a while until in 2015 Yamaha with their new 200 crank horsepower YZF-R1 joined the party which is a motorcycle that perhaps’ unofficially a road going version of their MotoGP M1 motorcycle.

Since then we have seen a slew of new or revised motorcycles from Europe and Japan in the way of various revised ZX-10R’s.

All the above are 200 horsepower plus motorcycles that were positioned to slay the S1000RR.

Not only did these new motorcycles all come with S1000RR matching or beating engine performance but they all pretty much had an array of the latest MotoGP derived electronic rider aid packages.

This meant that to stay relevant BMW engineers really had their work cut out to not only design a totally new S1000RR from the ground that trumped the previous model in all areas which is no mean feat, but it had to at least as good as the competition too.

BMW really did a great job and designed and built a motorcycle that is arguably the best mass-produced motorcycle on the road today.

While peak horsepower had largely remained the same right up until the latest model, the main improvements in the engine have come in the way of more bottom and mid-range torque.

The first S1000RR engine was and still is ballistic though it was quite the howler and behaved more like a Supersport 600 cc motorcycle on steroids. The engine really had to be 7000 rpm and above before warp drive would ensue. Below that while still quick, it was lacking relative to some of its rivals.

As the S1000RR engine was the 1000 cc benchmark for so long, and seeing as Kawasaki and Yamaha were really the first of the Japanese to respond with a brand new bike you can clearly see that in respect of Yamaha, they likely took some design inspiration from the S1000RR engine which is reflected in the R1’s engines power delivery.

The 2015 Yamaha YZF-R1 engine is actually remarkably similar in power delivery if you compare graphs back-to-back.

The latest S1000RR engine on most Dynos produces around 15-20 hp at peak more than the outgoing model, which is massively impressive.

You can thank the S1000RR’s new shift-cam as the new engine employs BMW ShiftCam tech on the intake that varies intake valve timing and lift. It has sliding concentric outer shafts, with two different cam profiles on them on a splined inner shaft with the drive on one end.

An ECU-controlled motor switches between low and high-speed cams at 9,000 rpm in under 10 milliseconds, which produce soft, low-lift, short-duration cams for low-down and midrange torque, then a more aggressive profile cams for peak power production.

The results are utterly amazing. There are other motorcycles that employ similar tech such as Suzuki’s latest GSX-R1000 but you could argue that BMW’s implementation is the best we have seen so far if looking and dyno charts.

As motorcycle manufacturer’s chase ever-bigger peak horsepower numbers they need higher revving shorter stroke engines, and this robs these engines of power and torque in the mid to lower halves of the rpm ranges making these clever cam designs so important.

That’s astonishing enough but the original bike is completely dominated through the entire rev-range and especially below 7000 rpm.

And at that exact number the new S1000RR is 27 horsepower up. The closest that the original gets to the new bike is at around 11,000 rpm where it gives away only around 5 horsepower.

To see what this looks like on the road and through each gear look at the below thrust curve where you will see that the new S1000RR dominates the older model in any gear at any speed.

Thrust curves are the graphs that we should be paying much more attention to as the typical power and torque curves can only indicate what the engine performance is in isolation.

The engine performance while obviously key does not exist in a vacuum and must be translated through the gearbox, and each of the motorcycles 6 gears before we actually get to feel its performance from the seat of our pants as it thrusts the motorcycle forward.

Think of gears simply as leverage or more accurately as multipliers of torque. Engines produce torque and gears multiply it and apply it at speed.

Gearing a motorcycle correctly will make best use of the torque that the engine delivers at any given rpm, and you the rider will feel this as acceleration when you twist the throttle.

In the above graph, what you are looking at is the acceleration/thrust available for both motorcycles in each gear which is then plotted against speed.

You will see 6 lines for each motorcycle. Blue for 19 plus S1000RR and Red for first generation S1000RR.

The lower the gear the more acceleration/thrust available to the motorcycle.

If you look at the shape of each thrust curve in each gear, you will see that they are all the same for each gear of the particular bike you may be looking at.

If you compare all lines for all gears to the torque curve of the motorcycle you can see that they are the same shape and have the same peaks and troughs. That is because the thrust curve is the torque curve but multiplied and translated through each gear.

Gearing for both new and old BMW S1000RR’s is exactly the same for the individual cogs, with the only difference coming in the way of rear sprocket size. The 19+ S1000RR has a 45-rear sprocket versus the 44 for the Gen 1 S1000RR so overall gearing on the new motorcycle is a fraction lower.

Not only does the new S1000RR have much more power and torque throughout the entire rev range, it also has slightly lower gearing too which will further add to its dominance for in-gear thrust/acceleration.

The new model is dominant at any speed and in any gear. The new S1000RR dominance is mostly pronounced for two thirds of each gear thrust curve.  For the old bike to stay with the new bike from a roll at almost any speed has to be in a gear lower otherwise it would be stomped.

BMW have done an amazing job and produced the kind of in-gear thrust you would expect from an engine with an extra 100/200 cc and will trade blows and even beat a Panigale V4 and RSV1100.

As the new bike revs a little higher than the old, BMW could have geared even lower without losing much reach/speed in each gear all the while producing even more potent in-gear thrust.

Just to be clear, the thrust curves you are looking at does not take into consideration the many in-gear ECU throttle limitations and restrictions that many motorcycles come with from the factory. The graphs you are looking at are without these throttle resections and are a direct 1:1 of torque multiplied by gearing. They are kind of how the bike would look after an ECU flash or if the stock ECU came with zero restrictions.

It is no surprise that the latest S1000RR is devastating in a straight line and no surprises that it is even quicker than the original which for a very long time (alongside with the Gen 2 Hayabusa) were one of two benchmark motorcycle for straight-line performance.

If we exclude the H2 and H2R  as well as other special motorcycles, the new S1000RR sits at the top of the pile with the Panigale V4 and RSV1100 where the three trade blows for straight-line supremacy. Probably followed by the current GSX-R1000 and then the R1.

In saying that though the new CBR1000RR-R would be up there too. Forget the ZZR14/ZX14 and Gen two Hayabusa, and the slightly lower power gen three as due to their weight they’ll often lead from a dig, but on a highway the latest litrebikes have those heavyweights beaten convincingly as they make more horsepower and are much lighter.

Like all lightweight litrebikes the 0-60 mph times are always difficult and the S1000RR is no different. Even with launch and wheelie control, while perfectly capable they are hard to dip under the three second mark, with the S1000RR achieving a 0-60 mph in 3.1 seconds which in first gear is 9000 rpm.

Getting a sub three second 0-60 time will be simply down to the rider skill and luck, as well as conditions on the day and not the bike.

Even after 60 mph and still in first gear wheelies are a problem. That 200 hp can never be put to the ground immediately and unfortunately for the new BMW it needs a change to second to hit 100 mph which it achieves in 5.50 seconds.

0-100 mph between 5 and 6 seconds is pretty much a time that all litre litrebikes of the last 20 years can achieve but for the latest litrebikes and the S1000RR, it’s when second and third is engaged when it becomes easier to translate that insane power into forward motion…. At which point older litrebikes would be rapidly dispatched.

Even older litrebikes can!  Yes, it can but much of what a motorcycle will do in a quarter mile is more about the rider skill size and weight, and of course the conditions on the day rather than simply what a motorcycle is capable of.

Getting into the 9s on a litrebike requires a very impressive 60 ft time. Most of the 150 horsepower plus litrebikes I have tested have 60 ft times of around 1.9 seconds. 1.7 seven is require generally to get sub 10s at the horsepower level.

If you baby it you won’t be in the 9s unless you have even more insane power than the S1000RR to claw back lost time from the dig.

0-180 mph should really be the Superbike benchmark if we are to measure from a dig. And the 19+ S1000RR is the fastest bike on test if we exclude the H2R . It beats out the Panigale V4 by a few tenths with an amazing time of 14.27 seconds. It’s almost two whole seconds faster than the Gen 1 S1000RR tested.

With the new S1000RR you can pretty much confidently play with anything on the road and be guaranteed the win other than a few Hypercars like the 765LT or some crazy fast tuned cars with 1000 hp plus.

If you remove the ECU speed limiter the new S1000RR is pretty much a 200 mph motorcycle.

If you decat it and dyno tune it, drop the mirrors and go down a few teeth on the rear we are talking a 210 mph motorcycle on the right day with a jockey onboard. We managed 197.4 mph but your results may vary.