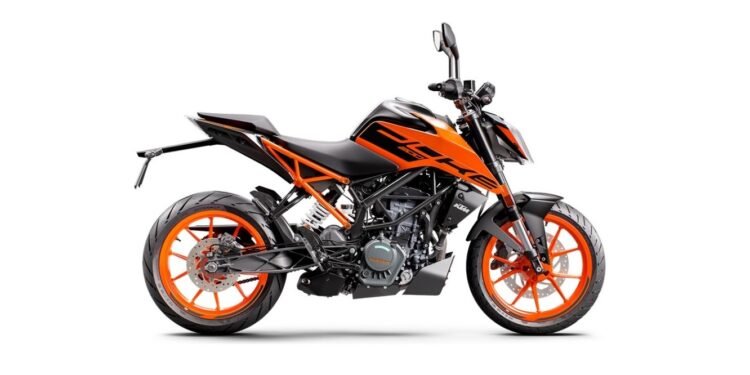 The  KTM Duke 200 is an entry level  learner friendly motorcycle that capable. It fits in between the150 to 250cc road and sport motorcycle class. 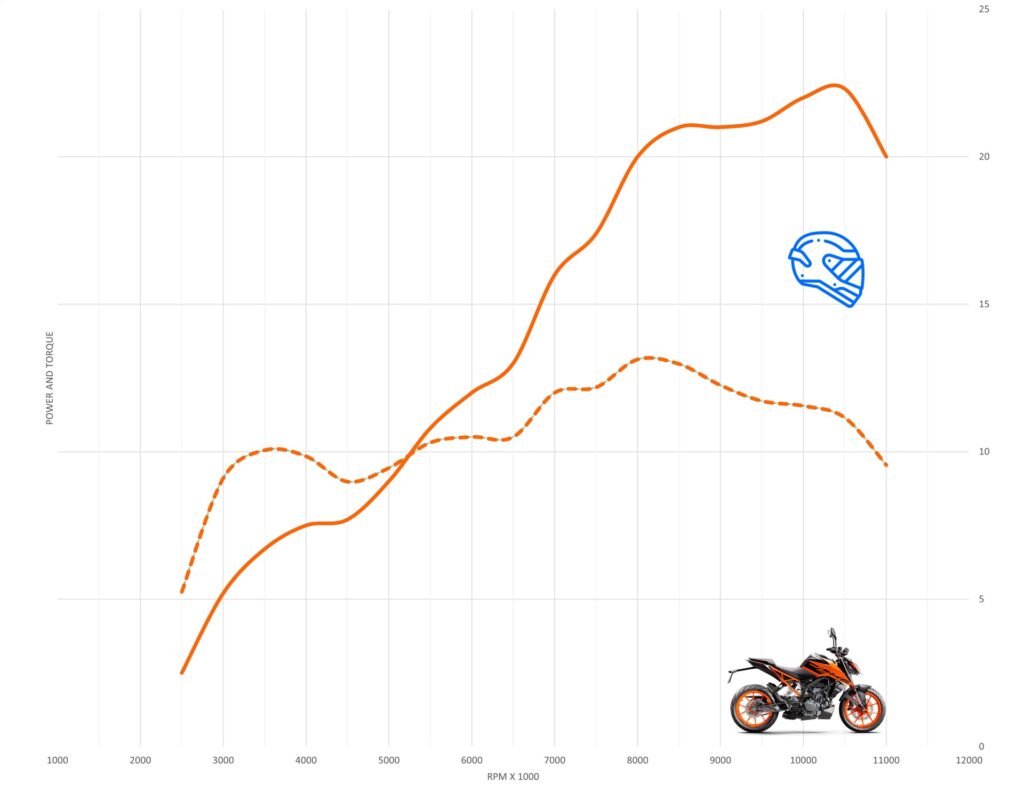 KTM’s little Duke 200 has an uncommon engine capacity for a road bike of 198 cc, though the little single cylinder engine packs a decent punch with KTM claiming 26 horsepower at 10000 rpm and a little under 15 ft/lb at 6800 rpm.

On the dyno numbers are good with 22.5 horsepower and 13 ft/lb produced at a little higher rpm than claimed.

The engine delivery is like that of the bigger sister (Duke 390) and is a high revving single cylinder engine that likes the be thrashed.

The curve has a few peaks and troughs though it feels more linear than the chart would suggest. You do still feel the little pick up from around 7000 rpm and then lastly again at 9500 rpm which does add a little excitement to the delivery.

Often sub 250 cc engines make a lot of noise but don’t really pile on the speed as quickly as the noise that they make might suggest but you do actually feel the 200 Duke move in the lower gears. 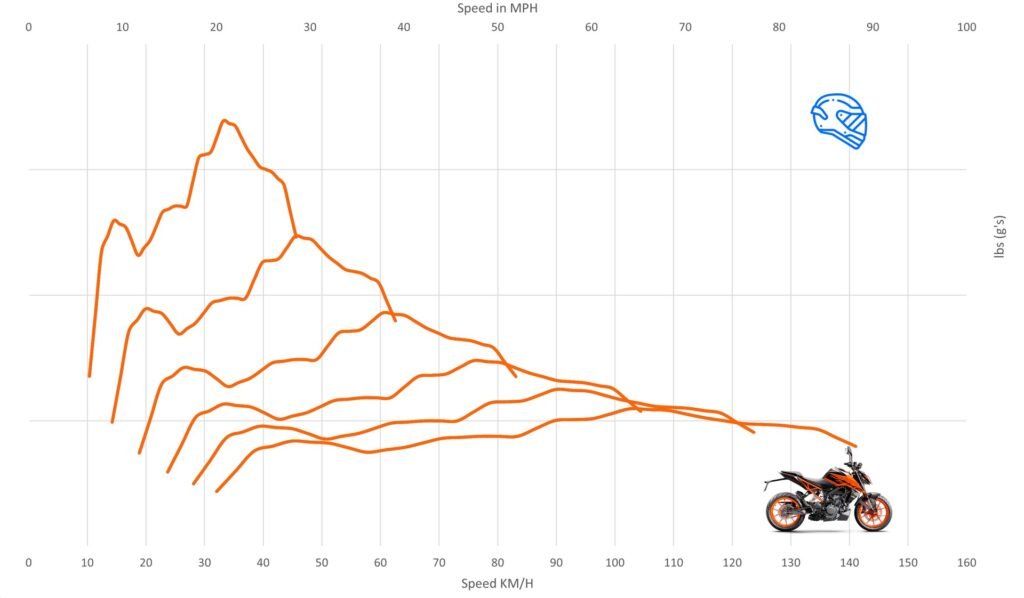 Due to the light weight of the 200 Duke, it does make the best use of its power as it is 10-30 kg lighter than many of its rivals, and this weight saving really does make a difference to overall feel and performance when a motorcycle makes less than 30 horsepower.

The actual engine performance in-gear is very impressive given that we are talking only 200 cc.  It can trade blows with a Ninja 250 in the first two-thirds of each gear but ultimately loses out up top.

At highway speeds, there is only so much 22 horsepower and lightweight can achieve and especially so for a naked motorcycle.

Still, though you can overtake in fifth or sixth as you’ll only gain slightly if in fifth as thrust is almost the same from 70 mph onward if comparing both gears.

If you have a headwind or an incline you may just have to sit behind that car you want to overtake and wait for the right moment.

Around town or on really tight twisty mountain roads, if you are moving below 70 mph the KTM 200 Duke is surprisingly peppy and will happily blast from one corner to the next and works best above 7000 rpm. 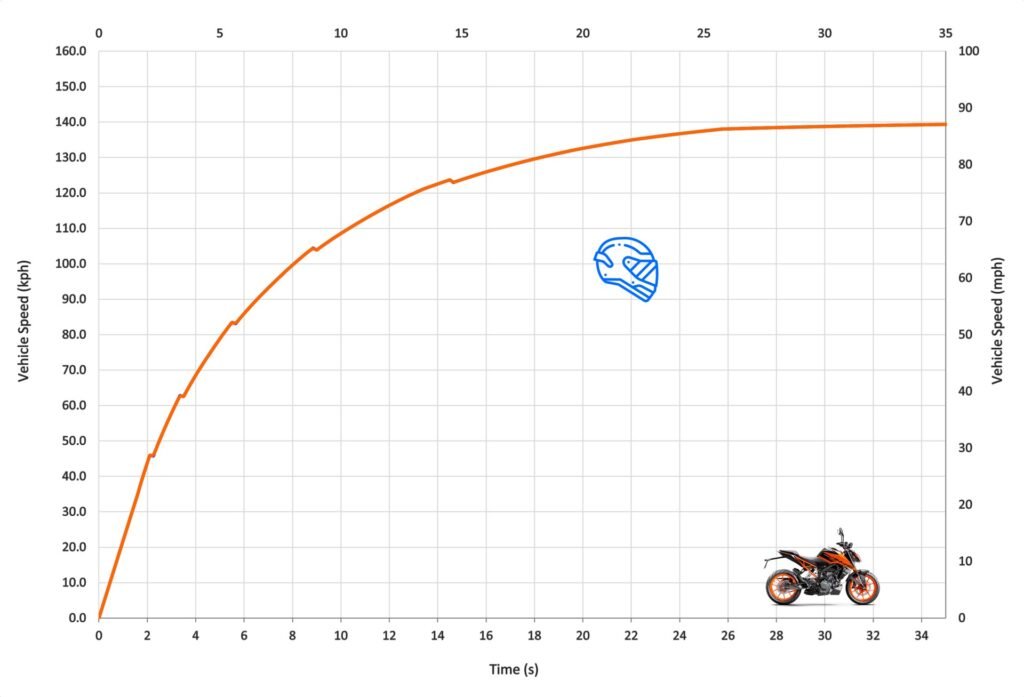 When it comes to acceleration the 200 Duke will not set the world on fire but does punch above its weight. It’s not a hard motorcycle to launch.

Just hold the rpm at around 8000 rpm and with a progressive but quick dump of the clutch and not let the rpm drop below 8000 rpm.  You can even get a little air under the front wheel as the little Duke surges forward.

Being such a small engine the KTM 200 Duke needs all six gears for the quarter-mile sprint which it manages in 16.10 seconds with a terminal speed of 78 mph.

After the 400m mark the Duke is settling down in top gear with the little 200 cc engine screaming its single cylinder drone at 10000 rpm and trying desperately to pull to 11000 rpm.

If you lay as flat as possible and tuck elbows right in, the KTM 200 Duke can just kiss the rpm limiter in sixth while hitting a top speed of 87.21 mph. But its hard work.

If you are not fully committed a real-world top speed is 75 to 80 mph depending on conditions of the day though the speedometer will read 5-7% higher.

If from a standing start the KTM 200 Duke will need around 1 kilometre to hit its stop speed and around 36-37 seconds.