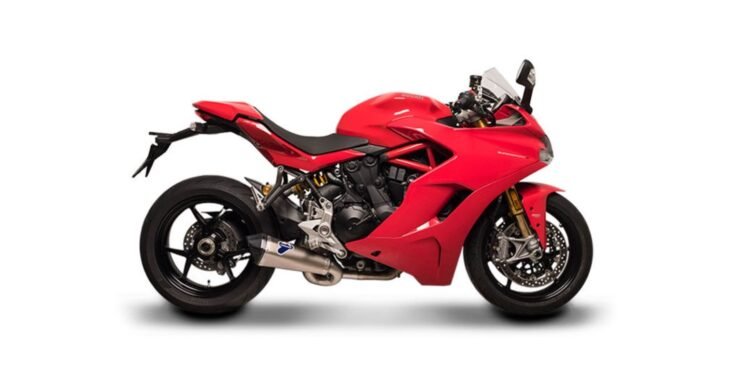 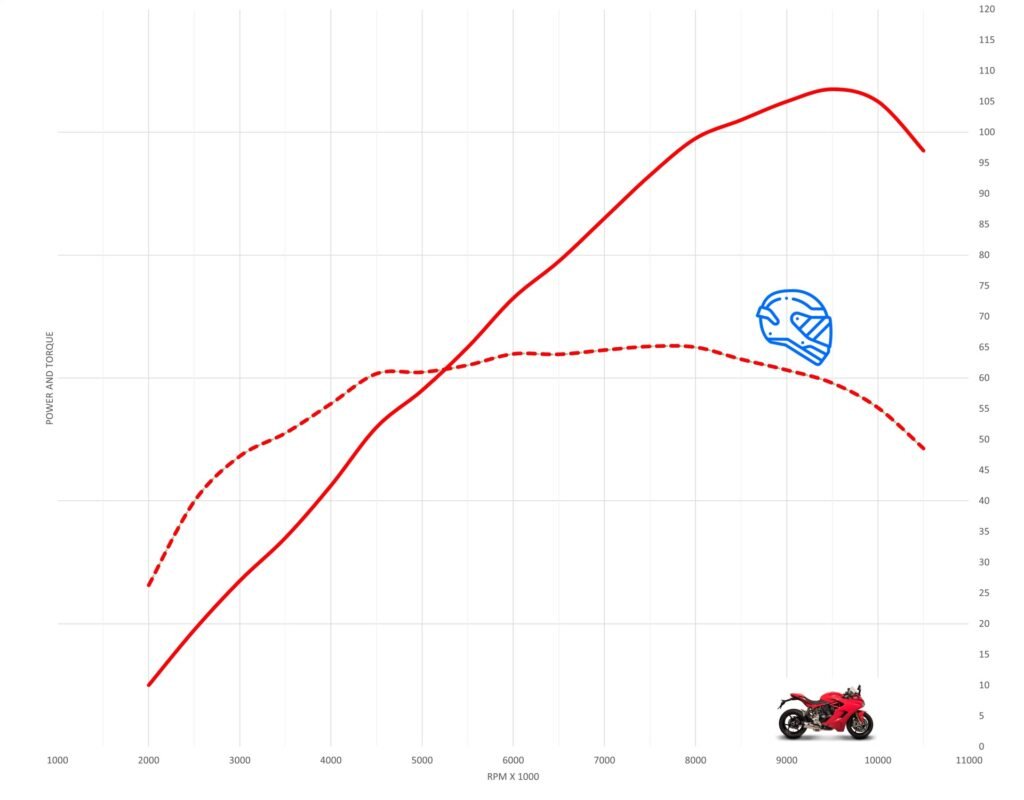 The new Ducati Supersport is equipped with the same 937 cc L2 that powers the Hypermotard and Multistrada 950 and the new monster. It’s an engine that some of you may be familiar with.

I can imagine a proportion of people probably wanted the 899 or 955 cc engine from the 899 and 959 Panigales, though while more powerful they are both very short-stroke engines that produce the meat of their power in a narrow powerband that just gets started at round 7000 rpm.

They both also have gaping holes in the midrange too which is where you want it for a more road-focused sports motorcycle.

Ducati made the right engine choice with their pick as the 937 cc L2 is a very good engine that certainly meets much of what is expected from a sports touring motorcycle.

The engine makes a very good spread of torque starting from 4500 rpm onward at 61 ft/lb a number that is very close to its peak figure of 65 ft/lb.

While torque is decent below this point, in higher gears you probably want to keep the engine spinning above 4000 rpm but in the lower three gears, there is still more than enough there to get you out of trouble without having to look for a lower gear.

There are no real surges in the delivery – just good honest and linear drive, especially between 6000 and 10000 rpm. The engine has kept some of the feel and performance of the original 900SS, just more power and torque and delivered with a little more rpm. 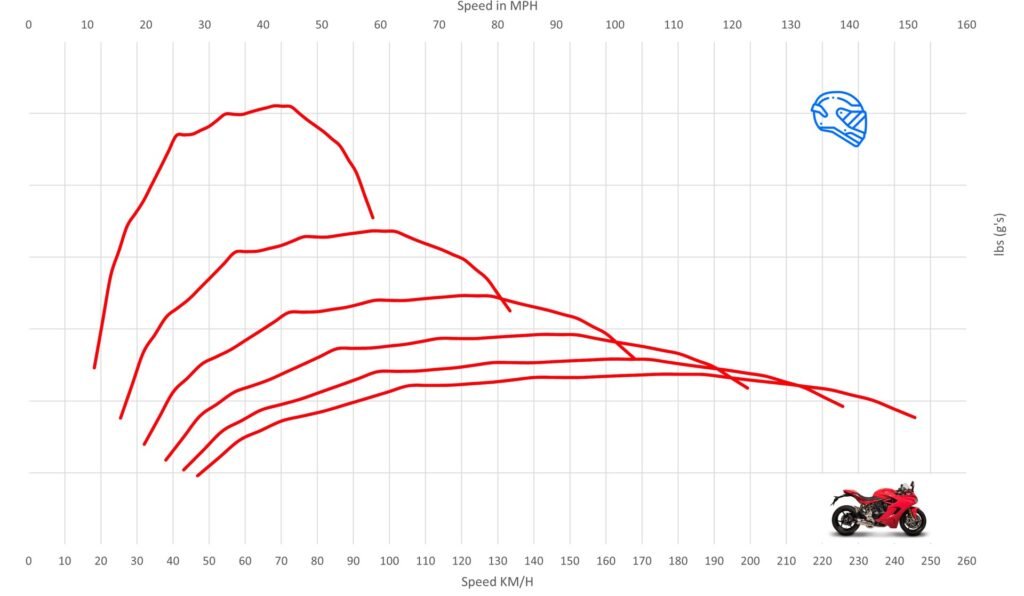 The engine is designed for the road and Ducati nails it for the intended purpose.

Often of late, we get served-up ‘detuned’ engines from sportbikes that are plonked into naked and touring motorcycles.

Despite often a redistribution of oomph from the top to the midrange via some tweaks, still some of these motorcycles require a little more work than they should to get moving when the rpm is at real-world speeds but not the Supersport.

There is only so much a retune can do when the base engine is a very short-stroke engine from the start that is designed to produce peak horsepower at a very high rpm.

An example of this can be seen with the 2018 plus CB1000R. While making a little more peak horsepower than the motorcycle it superseded it was gutless in comparison.

While the in-gear and engine flexibility performance are not as explosive as some more powerful sports tourers, the Ducati Supersport is currently up there as class-leading.

Gearing is the same as the Hypermotard and Multistrada which is surprising as I thought at the very least the Hypermotorard would have lower gearing.

Things do change as we get above 100 mph as the good aerodynamics of the Supersport come into play with the Multistrada and Hypermotard losing out as the speed increases.

Ultimately the three are objectively very similar but the Hypermotard feels more potent and responsive which it is but much of it is to do with how frantic it is and feels due to the zero-wind protection and its upright seating position.

For long sweeping corners on country roads, you can pretty much leave the Supersport in fourth gear and drive from 50 to 120 mph and have more than enough acceleration and range to have fun while being lazy.

You’ll have very little reason to use any other gear unless speeds get silly, or you hit a sub 50 mph corner where second and third gear would be more sufficient. 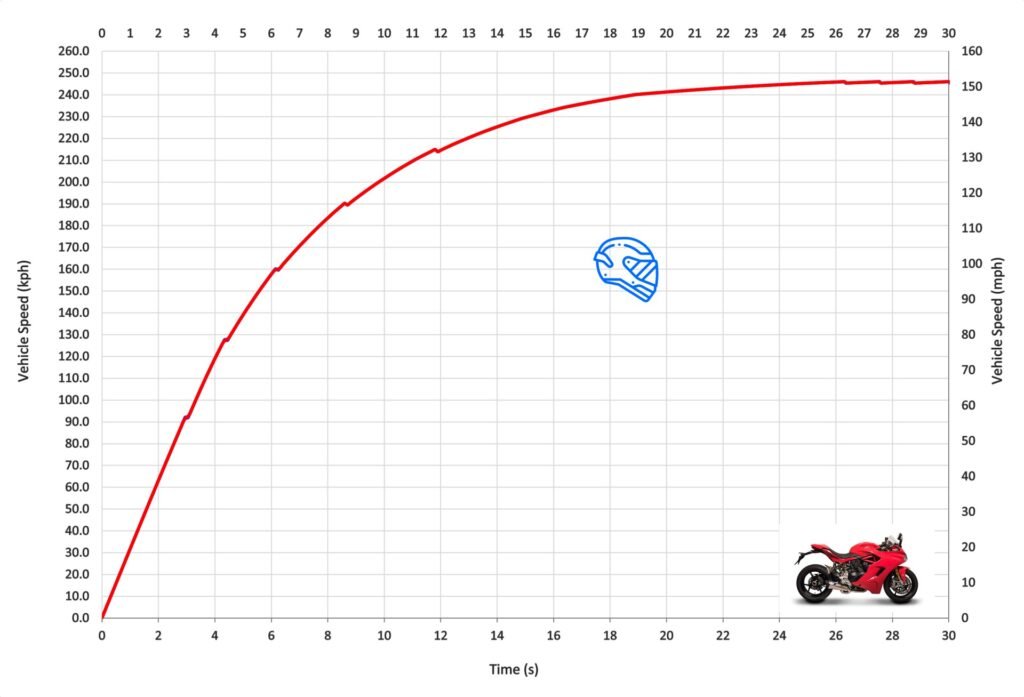 In a straight line, the Ducati Supersport is no doubt quick.

Of course, forget getting close to anything in the Panigale range though you can be at their heels below 100 mph. After that, they’re gone

The Ducati Supersport is probably around as fast as a Ducati 916 which makes sense as they produce very similar power and weigh pretty much the same.

The 916 was the pinnacle Ducati in its day, still handles as good as anything but is just average in a straight line compared to many later machines and would be beaten even by an 848.

Being as fast as a 916 should not put you off because just like the 916 the Ducati Supersport is objectively fast however you look at it and will trounce most sports cars and a very many Supercars at the quarter-mile strip providing that you know what you are doing.

A highway might be a different story, but you’d still get the jump on most and lead before traffic would spoil the fun.

The Ducati Supersport will happily reach for the sky when launching hard in first gear though better times can be had with wheelie control turned off.

You may be more consistent with it switched on but ultimately just like with any very good anti-wheelie system nothing beats a great throttle and clutch hand.

Launching does not require any strict method. You can dump the clutch anywhere between 5000 and 7000 rpm with similar results. You just need to be a little less aggressive with your clutch if your rpm is the latter.

It’s very hard to nail the 0-60 mph time as you pretty must change up a millimetre before the rpm limiter. Typically, this time would be slower as most would be changing into second at around 55 mph otherwise it’s easy to hit the limiter.

We hit 59 mph point something in first but rounded it up. Though thanks to the quickshifter you do not lose much time shifting as it provides a fast and solid shift.

Acceleration from 0-100 mph is very quick too with the Supersport dipping below 7 seconds with a smashing time of 6.50 seconds.

The Ducati Supersport lays down an impressive quarter-mile time of 10.99 seconds crossing the line at 128 mph. This time aligns it with some of the faster Supersport 600s and its old-timer relative the Ducati 916.

The Ducati Supersport charges hard even after the quarter mile and nails a 0-150 mph time in 21.32 seconds though could be a little quicker with longer gearing.

This is because as the Ducati Supersport approaches150 mph its power is tailing off quite rapidly. Slightly longer gearing would lower the rpm a little and ensure that there is a little more thrust from 145 mph onward despite the gear being longer.

The same can be said for your Ducati Supersport and its top speed of 152.9 mph. It hovers at the rpm limiter and where peak power has dropped off.

I could see the Ducati Supersport getting close to 160 mph with longer gearing and a taller screen.

The aerodynamics are great with such a svelte and narrow front end, but the screen is not that effective for silly speed antics. The seat also does not allow for much room to slide back, especially if you are a tall rider.

The Ducati Supersport will eat up the now discontinued VFR800 pretty much everywhere.