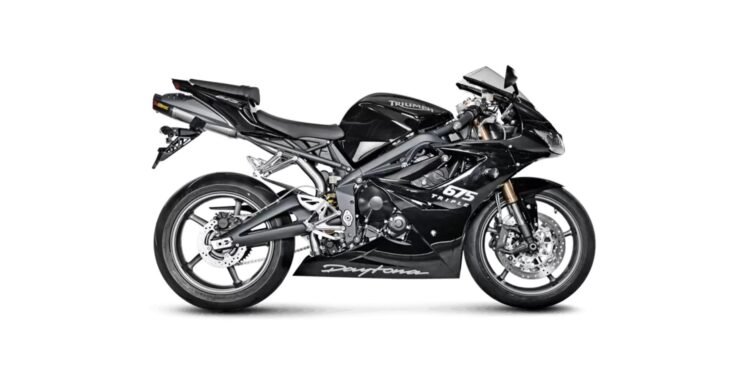 The Triumph Dayton 675  is a Supersport 600 class motorcycle that competes in a very diverse and competitive class where it is up against many models at a wide range of engine capacities and configurations.

Below we have top speed and acceleration data through the gears accompanied with Dyno Curve and Thrust Curve graphs for the Triumph Daytona 675. 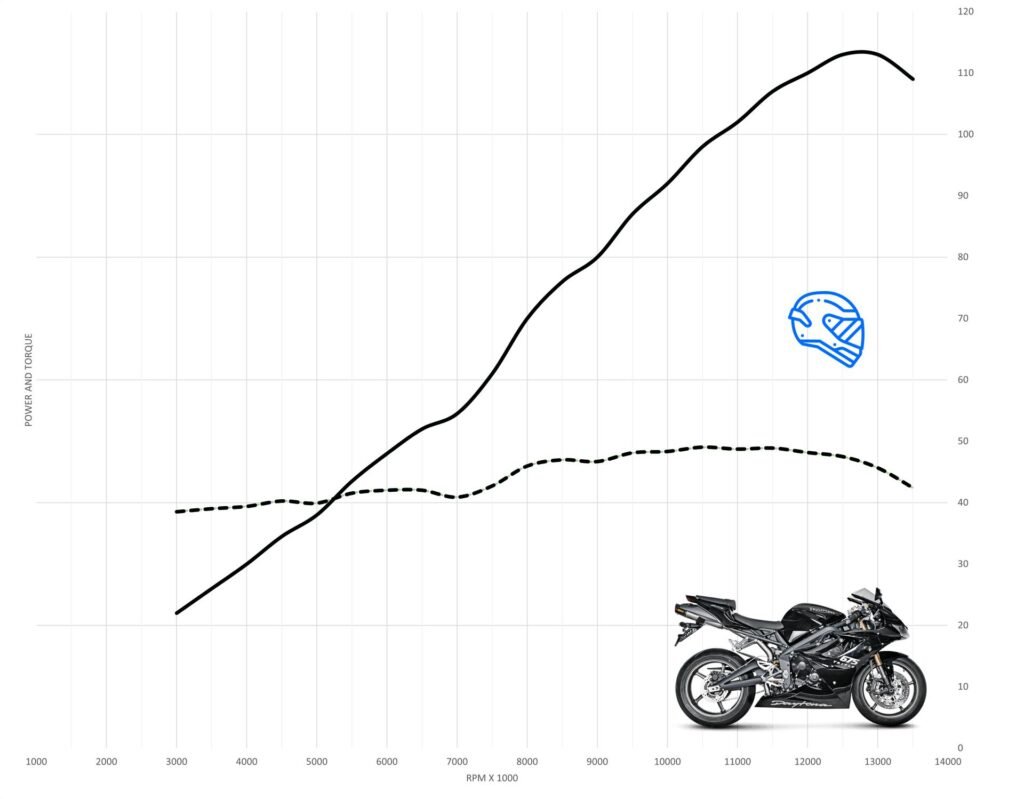 Power and torque are spread very nicely across a wide rpm, and unlike its 4 cylinder 600 cc rivals the Daytona 675 will drive from as low as 3000 rpm in higher gears quite comfortably while many 600s would provide a much more lethargic response.

Even if the 675 is a very trackable engine, like all Supersport engines the 675 likes to scream and becomes really effective from 8000rpm onward and right up to close to 14000 rpm which is almost a 6000 rpm curve to play with.

This means that there is no urgency to change down a gear if wanting to drive hard from a corner compared to competing bikes that are very peaky, and need to be in the exact right gear and rpm to provide effective drive. 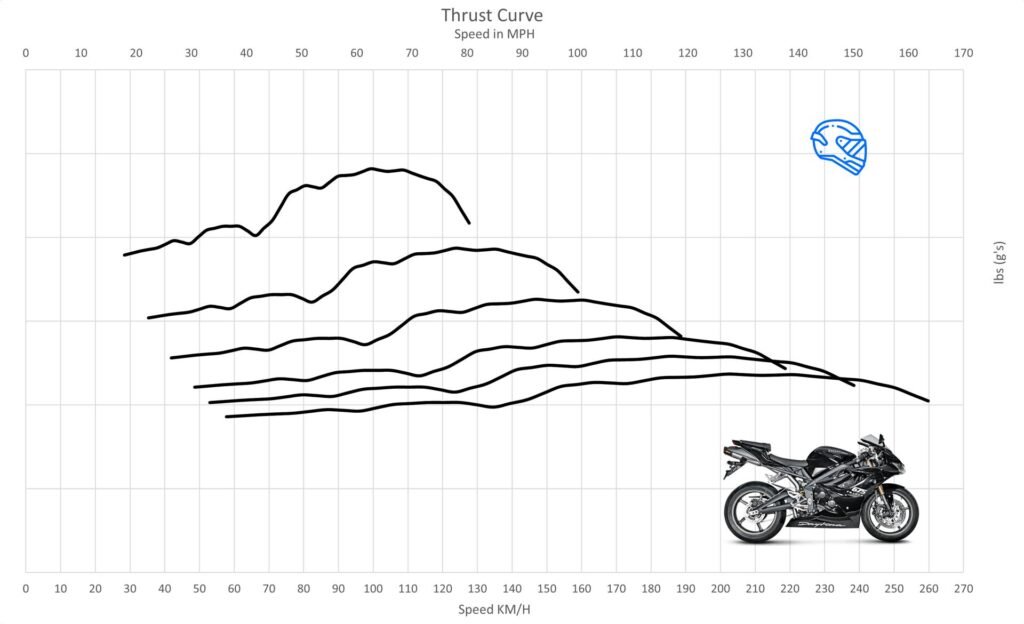 The flat acceleration curve can be clearly seen via the in-gear thrust curve which shows the torque curve being applied through the gears.

If compared to other 600s, their curves are very peaky and thus require more gear changes to keep them on the boil but with the 675 revs can drop to 8000 rpm in any gear and the 675 still provides similar thrust as if the revs were higher.

This makes the 675 engine very easy to get the most out of and means that it requires fewer gear changes in most situations and can run a gear higher compared to 600 cc rivals accelerating out of corners. 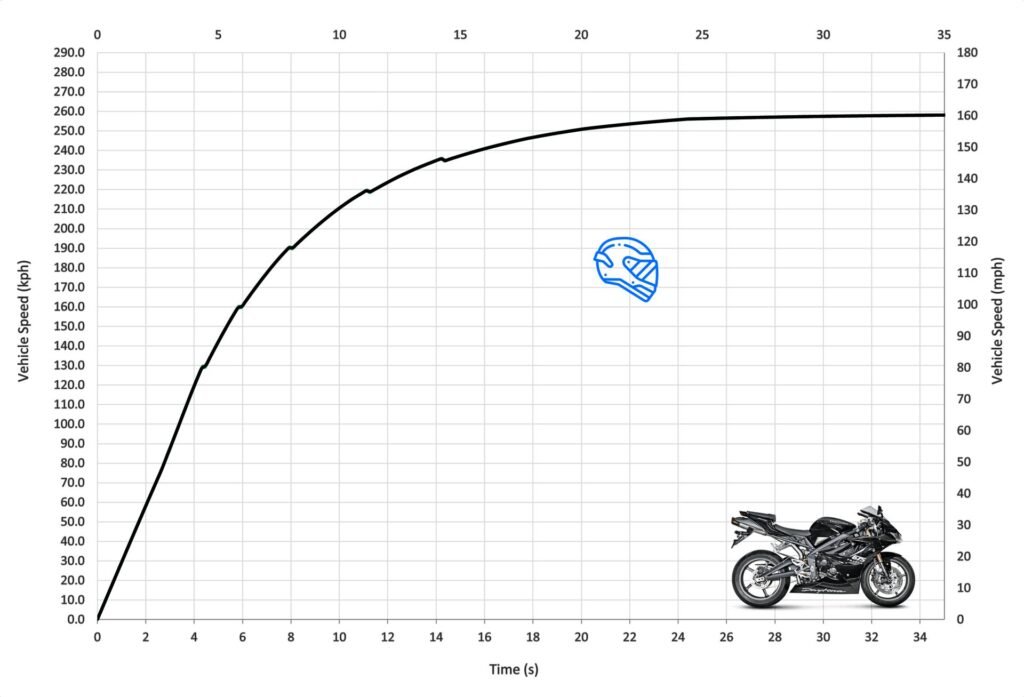 Triumph Daytona 675 Acceleration through the gears

The Daytona 675 is not the outright fastest 600 cc class motorcycle but due to its extremely lightweight package and punchy engine, it puts down some very respectable numbers.

The 0-100 mph spring is among the fastest of any 600 with a time of 6 seconds flat which will have you beating many 1000 cc bikes if you caught them napping or they did not launch too well.

Most 600 cc Supersport bikes past and present can achieve low 11 or high 10s on the quarter-mile strip with the 675 Daytona being the latter with a blistering time of 10.70 seconds at a very respectable terminal speed of 134 mph.

This time puts it right up there, but it still trails the R6 and ZX-6R.

After 150 mph the little screaming Daytona 675 starts to run out of puff as it slowly builds up to a solid top speed of 160.8 mph, a speed that is likely hindered by its tiny frontal area and gearing that hover at the rpm limiter in top gear.