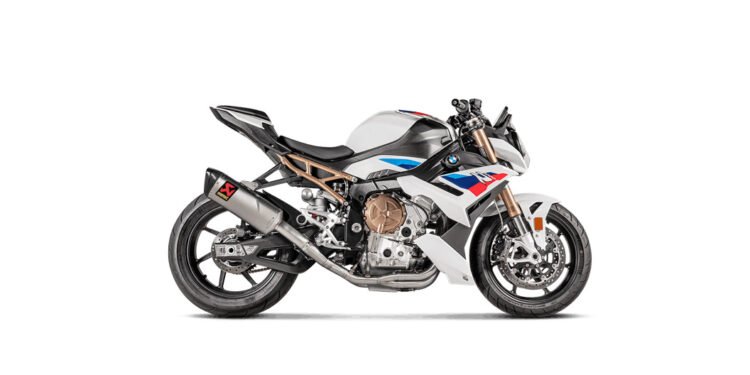 Below, we take a look at the BMW S1000R’s in-gear and outright acceleration through the gears, along with its top speed. 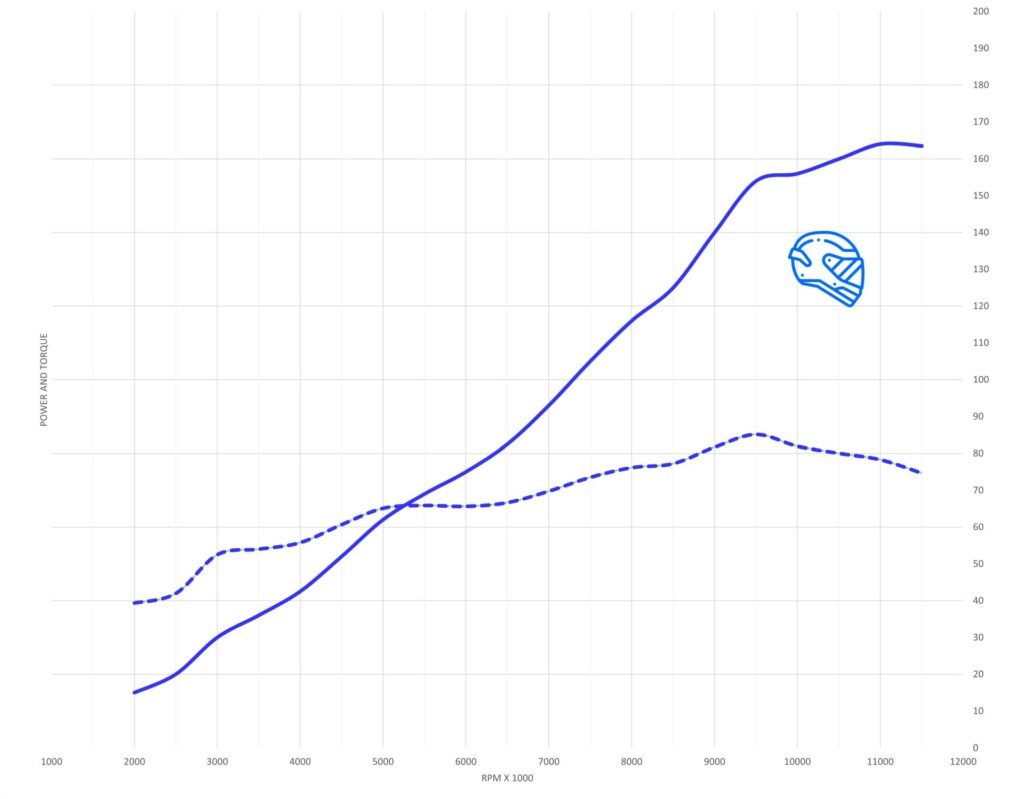 The new S1000R like the model it replaces takes its engine from the S1000RR, and not surprisingly this new model is powered by the engine from the latest S1000RR! As after all, it’s just an S1000RR with less plastic and upright handlebars.

For many naked variants of their Superbike siblings, the engines that power them are often retuned for more midrange and often less peak horsepower.

Before you shriek and ask ‘why’? 165 horsepower is still godly and especially in a naked bike that is as compact and light as the S1000R.

Also, consider that unlike many other manufacturers BMW’s claimed figures tend to be a lot closer to the actual measured rear wheel figure once ran through their paces on a rolling road.

I am not sure if BMW power claims are at the crank or the rear wheel. As often we expect to see 10-12% transmission losses but BMW’s margin of error with their claims seems to be much less.

Case in point as here the S1000R produces 163 horsepower while BMW claims 165 horsepower which would make the crank figure a little over 180 horsepower. Feeling better now?

It suggests that the engine is peaky, and while its character and curve look a little peaky judging how its torque curve climbs, remember that from 4500 rpm the S1000R is making more than 60 ft/lb which is heaps for such a light motorcycle.

As mentioned, naked variants of Superbikes normally get some tweaks to improve midrange and bottom end but the new S1000RR Superbike actually makes more power and torque lower in the rpm and particularly between 5000 and 8000 rpm which is kind of where you want it to be for a more road orientated machine. 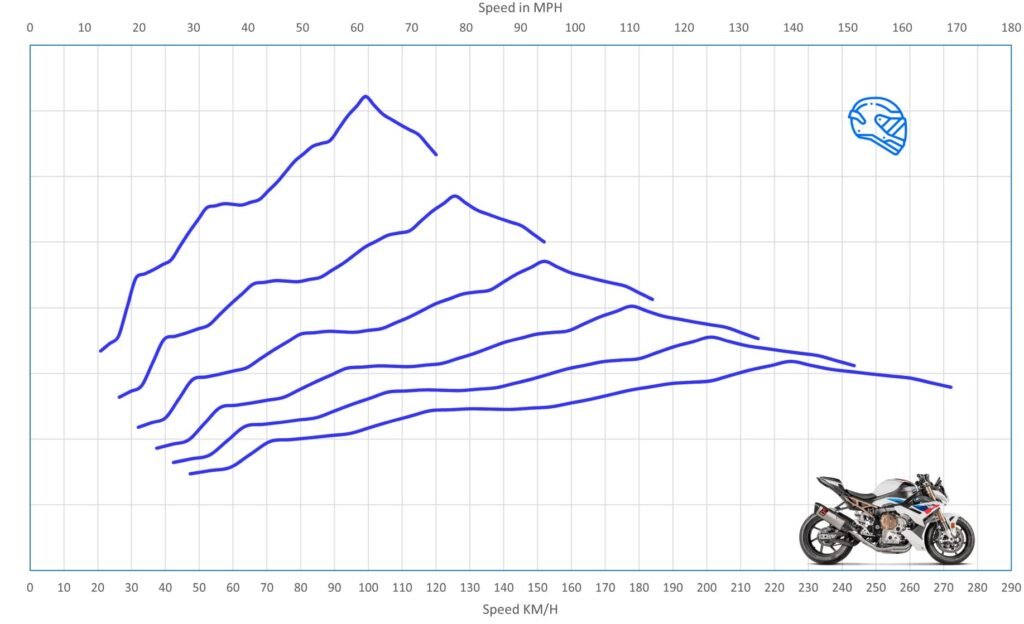 I would not let the fact that the S1000R makes less power and torque between 5000-8000 rpm bother you, as despite this the response of the engine is still monstrous and more than you really need in any real-world situation.

For you US people this dynamic between the two machines might be different as US spec S1000RRs have gaping holes in the midrange due to even more excessive restrictions in the ECU.

Naked versions of Superbikes often have gearing changes too but mostly lower gearing via front or rear sprocket changes. This is to provide more in-gear thrust and acceleration which is of course more useful on the road and in the real world.

For the S10000R BMW has opted for longer fourth, fifth and sixth gears, so you can expect less roll-on response in these gears versus the RR, as they are longer and also because the S1000R makes less power and torque between 5000-8000 rpm versus the S1000RR as already pointed out.

Again, though this should not concern you as the new RR engine is probably the most impressive engine ever made, so even if the S1000R is not as responsive this fact does not make it inadequate as it provides incredible grunt and acceleration in any gear at any rpm.

And also consider is a de-cat and ECU flash. This would massively bolster that 5000-8000 rpm part of the delivery. 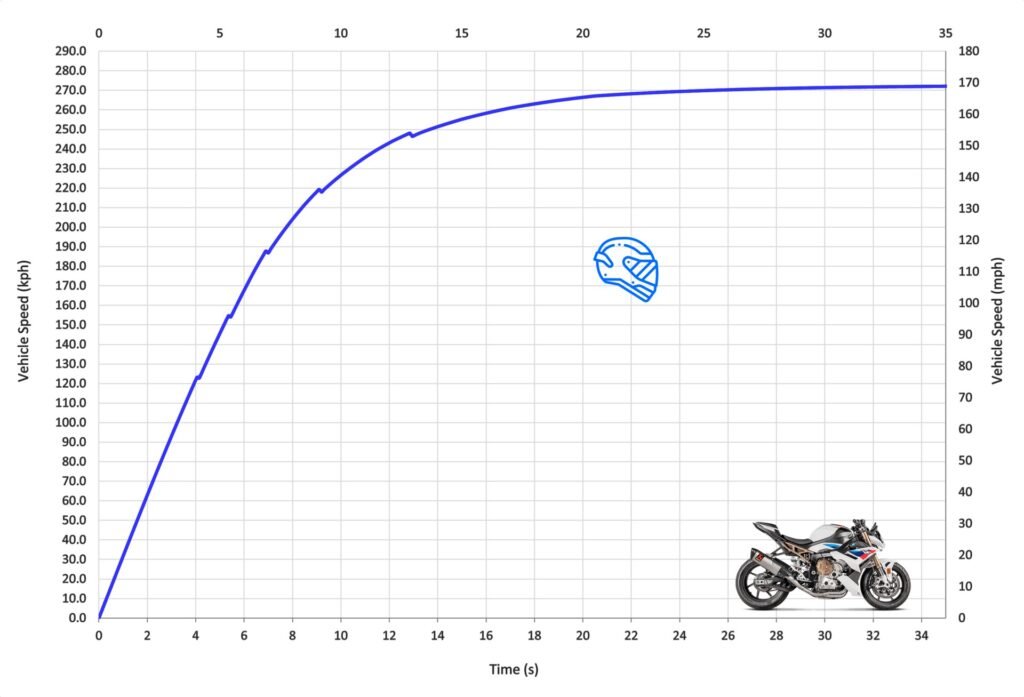 With the S1000R producing the kind of power top-of-the-line Superbikes made only a few years ago, it is to be expected that the new S1000R is a hugely capable and fast motorcycle.

If we look at the numbers, we have a motorcycle that will out-accelerate a CBR1100 Super Blackbird at any speed and in any gear below 170 mph and is miles ahead of Yamaha’s MT-10

Well tell lie, the Blackbird will often beat the S1000R to 60 mph but that is only because the former is heavier and easier to launch while the S1000R is light and wants to wheelie rather than lay its power and propel you forward. Electronics can help with the consistency but are better turned off for the very best times

The blast to 100 mph is achieved in a Superbike matching 5.75 seconds though does need third gear, as it is too easy to hit the rpm limit in second gear at 100 mph (or a fraction below) arrives right at the rpm limiter so is very easy for the limiter to end the fun and hurt your ET’s.

The RR variant can almost hit 100 mph in first so requires only second gear.

From 60-130 mph which is the Dragy benchmark, the S1000R is very quick and achieves this benchmark in only 5.23 seconds when using first but in the real world, you’d be doing 6.5 seconds as first is too aggressive to be consistent if from a roll and too short-lived, so second gear would be the go.

For best ET times from zero to flat-out, you pretty much got to change up each gear right at the redline or around 11500-11600 rpm. As anywhere before will hurt your ET’s a little.

It is at this point that its lack of faring and screen starts to eat into its impressive 160 plus horsepower. Despite this, the S1000R still moves rapidly and onto its top speed of 170 mph which is just shy of the rpm limiter in top gear.

Despite the poor aero, the S1000R would likely bounce off the limiter in top gear but likely some electronics interfering in this case.