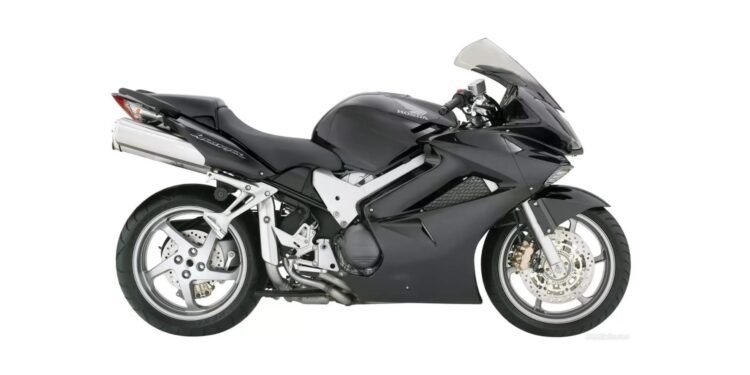 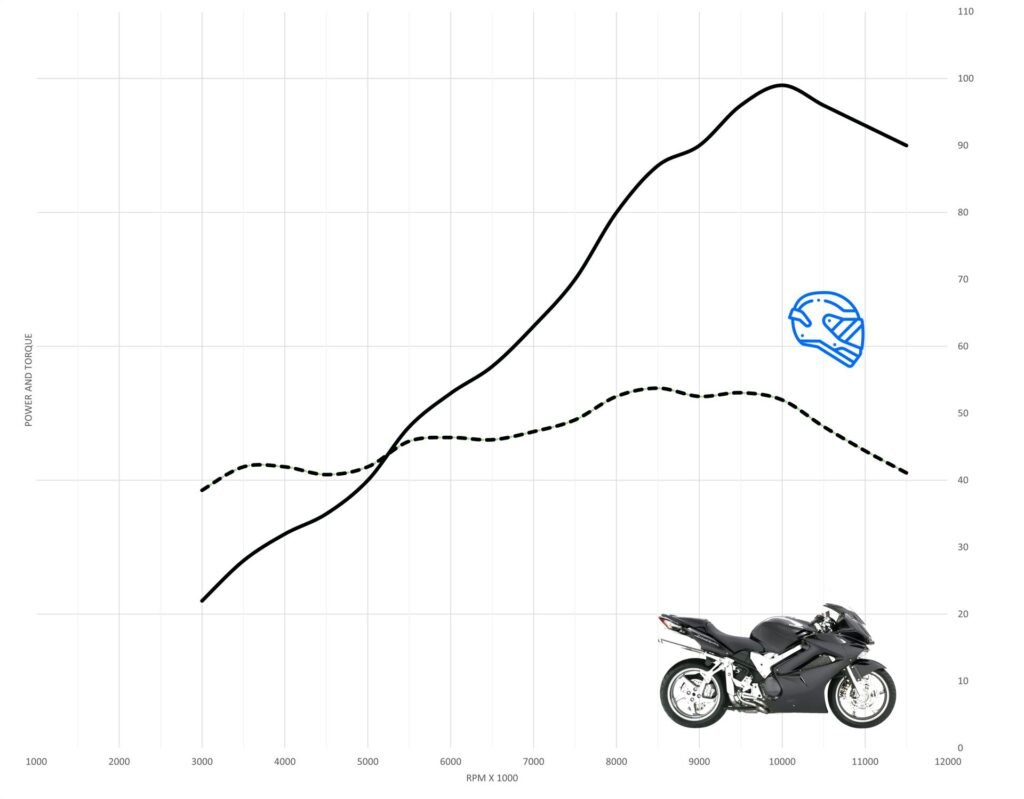 Honda’s 785 cc V4 Engine is a peach despite not setting the world on fire with its 98 horsepower at the rear wheels, a number that is is lower than most 600 cc Supersport motorcycles. Though torque is respectable at 54 ft/lb at 8500 rpm.

Thanks to its 185 cc advantage versus a 600 cc Supersport engine it makes much more power and torque throughout the rpm range for a much easier and less frantic experience and thus requiring much less rpm to acclerate.

Despite not revving too high the VFR800 does encourage you to stretch her out a bit, especially in that VTEC zone where the engine picks up nicely, not to mention the glorious noise from that V4. Either way, there is plenty of power from as little as 3000 rpm but the engine works best from 5000-9000 rpm where it deliver very good drive, 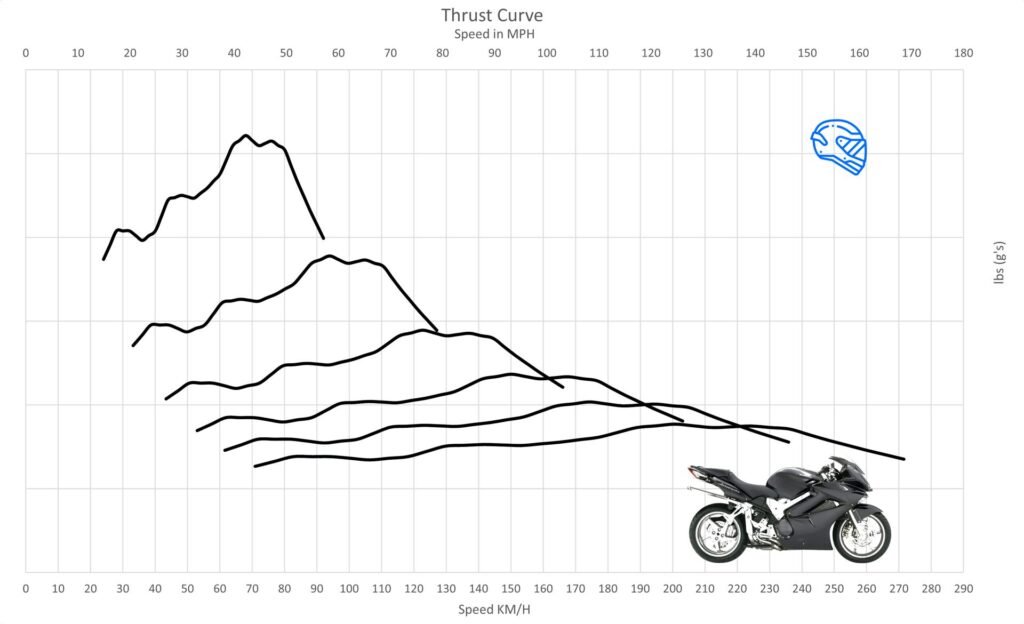 The VFR is geared relatively low for the first three gears making the engine very responsive and ‘torquey’ feeling which helps it overcome its hefty weight. While fourth to sixth gears are a little longer.

While the VFR engine is responsive though you do probably want to kick it down if in fifth or sixth as not much acceleration available if wanting to accelerate swiftly from highway speeds at which point the VFR800 shows around 4700 rpm at 70 mph and right where there is also a little flat spot in the torque curve. The VFR 800 is geared more like a 1000 cc motorcycle in the remaining three gears.

Definitely, the VFR800 would benefit from a larger sprocket at the rear but that would make it much buzzier in the lower three gears and would hurt fuel consumption on the highway for those that prefer a relaxed ride. 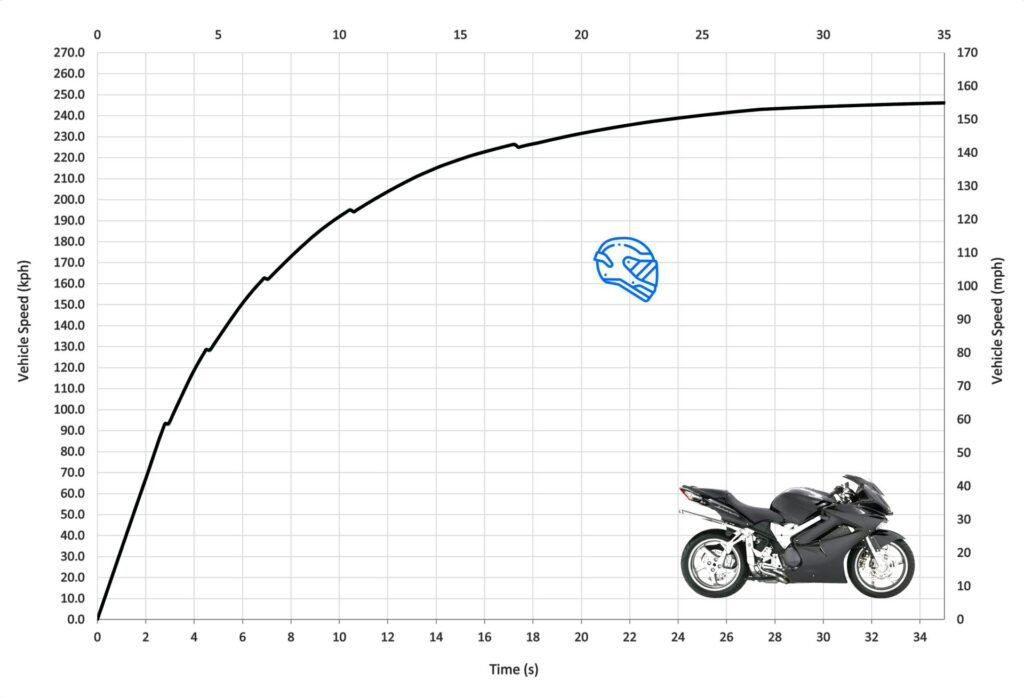 Honda VFR800 acceleration though the gears

The VFR800 has lived most of its life during the days when 100 horsepower was more than enough. It still is more than enough but now we have naked bikes, adventure bikes, and tourers making 150-200 horsepower!  Even if the VFR800 is a 100-horsepower motorcycle and it is 50 kg heavier than a Supersport 600 it can still move.

Thanks to lower gearing and its girth, which actually works in its favour off the line as you can really nail it from a dig and not worry too much about wheelies.

Despite needing three gears to hit the magic 100 mph the VFR800 still manages a particularly good time dipping under 7 seconds at 6.75 seconds to the ton.

The quarter mile is low 11s for the VFR800 at 11.14 with a terminal speed of 123 mph. All great times and objectively fast regardless of your vantage point.

Anywhere from 0-130 mph the VFR has even the fastest bikes in view and is older 600 cc Superport fast.

It is from then on that faster more powerful bikes and the latest 600s will walk it with the VFR800 managing 0-140 mph in 16.82 seconds with a typical modern 600 managing in under 13 seconds.

Though the 0-130 mph range despite still being illegal is the most useable range on the road and is a speed where most of us live when blasting around our fav roads and the VFR offers more than enough poke. If you want more look at