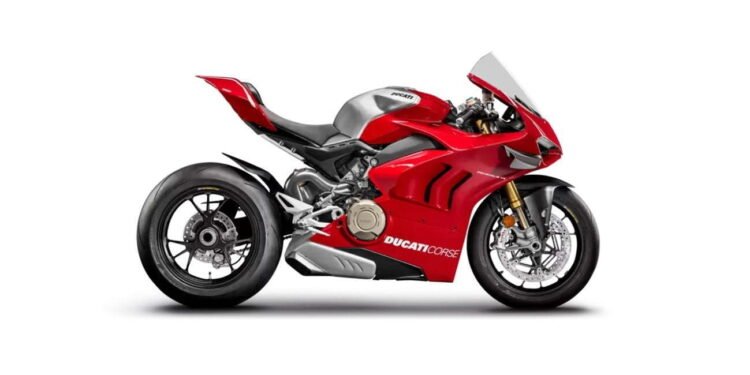 For many years now Ducati has had an ‘R’ version of their flagship Superbike. The R is a homologated version of their current Superbike. In the past, we’ve seen many Ducatis with the R extension, including the Panigale 1199R, 1098R, 999R and many more.

Homogolating a special version of the existing Superbike allows manufacturers to qualify a more expensive and competitive Superbike specifically for World Superbike Racing.

The standard Panigale V4 does not meet Superbike class regulations due to the 1103 cc engine being too large, so Ducati put together a very special 998 cc V4 Engine just for Superbike racing. 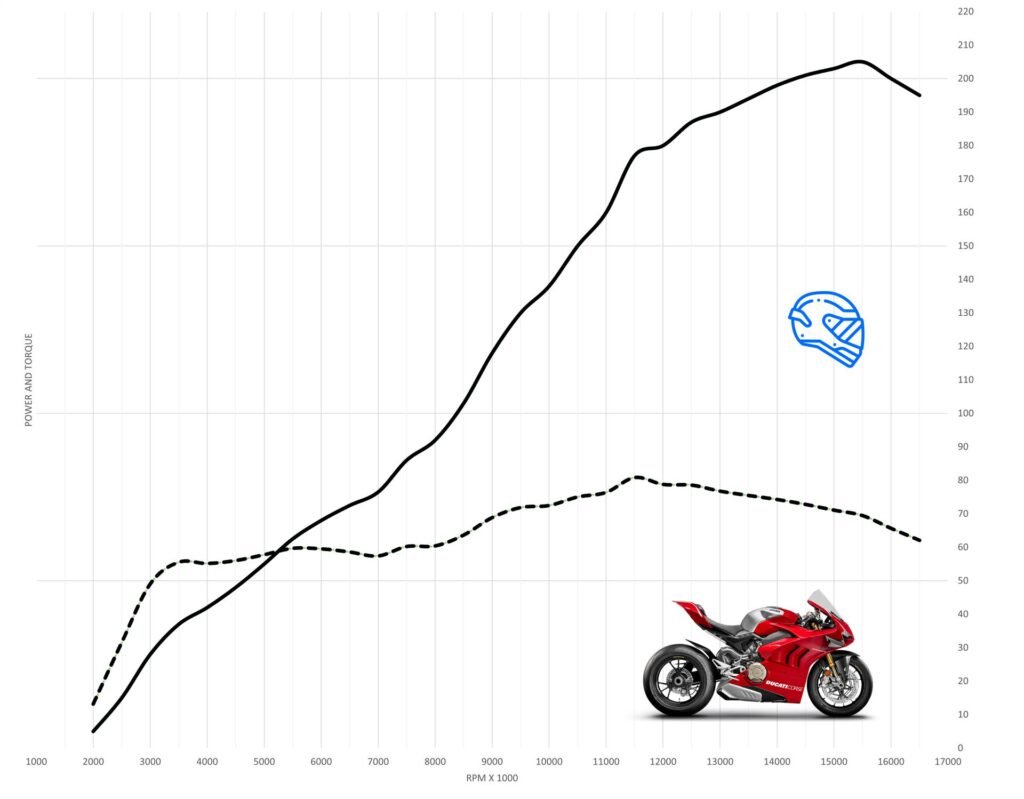 In short, Ducati took shrunk the V4 engine by shortening the stroke from 53.5 mm to 48.4 mm, making an already very short-stroke engine even more over the square.

The 998 cc Ducati Panigale V4R is the most powerful and high-revving normally aspirated production motorcycle engine ever released. Ducati claims 221 horsepower at 15,250 rpm and 83 ft/lb at 11,500 rpm.

With the optional Ducati race kit claimed power is upward of 237 horsepower.  That’s an astonishing 237 horsepower per litre.  That’s higher than a Yamaha YZF-R6.

What is perhaps more remarkable than the peak power is how high the Panigale V4R can rev. Peak power is produced at over 15,500 rpm though in top gear the V4R will rev out to beyond 16,000 rpm.

The only other motorcycle that can match the Panigale V4R’s crazy rpm potential today is the Honda CBR1000RR-R and from yesteryear,  old Japanese 250 four-cylinder motorcycles from the past.  Yamaha’s R6 and Kawasaki’s ZX-6R can get close though their rpm gauges are very optimistic.

The Panigale V4R has lost much of the stock V4’s immense power and torque throughout the whole rpm range due to losing 100 cc and the engine being even shorter-stroke.  Its power delivery is much more like how one might imagine a Supercharged 600 in its character.

After the very linear and flat torque delivery between 3000 rpm and 7000 rpm, from then on the engine delivers immense power, at what seems endless in its delivery thanks to that hugely wide rpm range.  On the Standard V4 you’d be changing gear at around 13,000 rpm or maybe a little higher, though with the V4R you’d scream it to 15,000 rpm plus.

If you flash the ECU you can experience the full 16,000 plus rpm in each gear, instead of only sixth gear. As if 15,500 was not already enough! 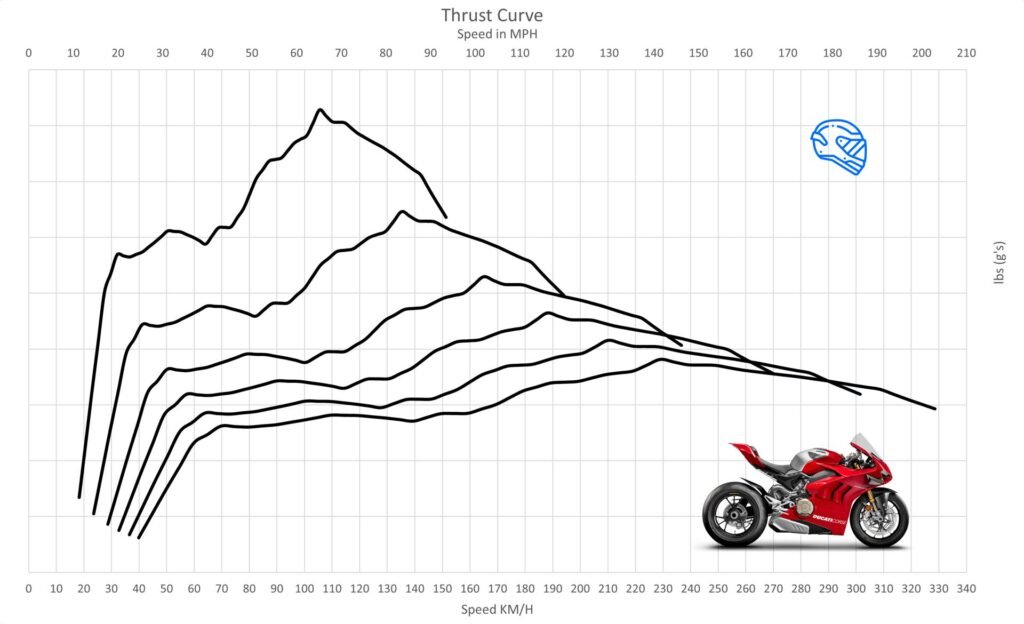 The V4R may have less horsepower and torque than the 1100 cc V4 but as the engine can rev higher the V4R does run with lower gearing.

This means that despite the lower torque and power through the rev range the V4R can match the V4 in terms of an in-gear acceleration though will be tunning higher rpm.

Rpm for rpm the Panigale V4R is not as punchy as the standard V4 though side-by-side in the same gear it pulls just as hard and then pulls harder passed 13,500 rpm.

Despite being hugely rpm happy the,  V4R provides as much if not more in-gear acceleration than some of the best in the class.

This is thanks to it being lighter than any other 1000 cc sportsbike in the class and that extremely low gearing.

For some perspective, the Ducati Panigale V4R is geared lower than a GSX-R750, with the V4R producing much more torque and peak power throughout the entire rpm range versus the GSX-R750.

This low gearing and weight make the Ducati Panigale V4R almost untouchable on the road, gear for gear speed for speed.

In the second gear, the Panigale V4R almost produces the same peak thrust/Acceleration as the R1 in first gear.  If you have ever ridden a 2015 plus R1 you’d know how bonkers first gear is and the V4R’s second pulls just as hard., albeit from a higher speed. 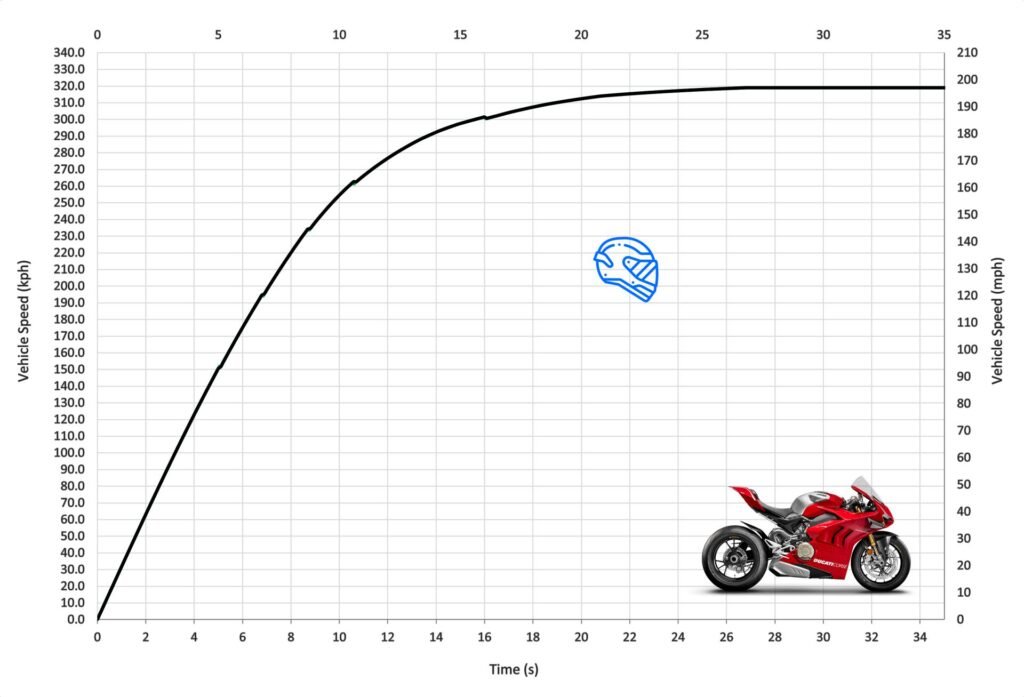 The Panigale V4R is perhaps (if excluding the Superleggera) likely the fastest accelerating motorcycle in the world. Perhaps not from a dig but certainly if moving at any speed and to 180-190 mph there is not much that can touch it.

It is not until the V4R gets into third gear that it is able to really start putting its power down effectively as it charges toward the quarter-mile hooking fourth and passing with a time of 9.95 seconds and at a crazy high 159 mph terminal which really demonstrates the V4R’s top end power.

Like all 1000 cc Superbikes, their quarter-mile times are massively hindered by the difficulty to launch them. The Panigale V4R also has this problem too but even more so with its huge power, low gearing and low weight.

Wheelie control varies between motorcycles. They all do a great job but for many 180 horsepower plus motorcycles, you don’t get full power until third gear, though the Panigale V4R will still have the wheelie control kicking in when in third gear. It’s wild but much easier to lay the power down once out of second gear.

With more time to get used to launching the V4R quarter-mile times would come down to mid 9s possibly with a similar trap speed.

After the quarter mile, the V4R charges extremely hard and harder than anything else out there except for an H2R. It will hit 0-180 mph in only 13.54 seconds. The top speed for the Ducati V4R is 198 mph but with further ECU tweaks and restrictions removed 210-215 mph would easily be achieved with a small rider.