by Fabio Rossi
in Cruisers, Motorcycles
A A
0 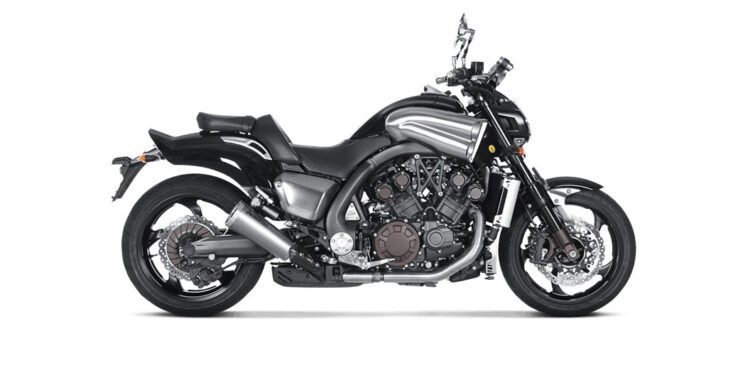 Below, we take a look at  the Yamaha VMax’s in-gear and outright acceleration through the gears, along with its top speed. 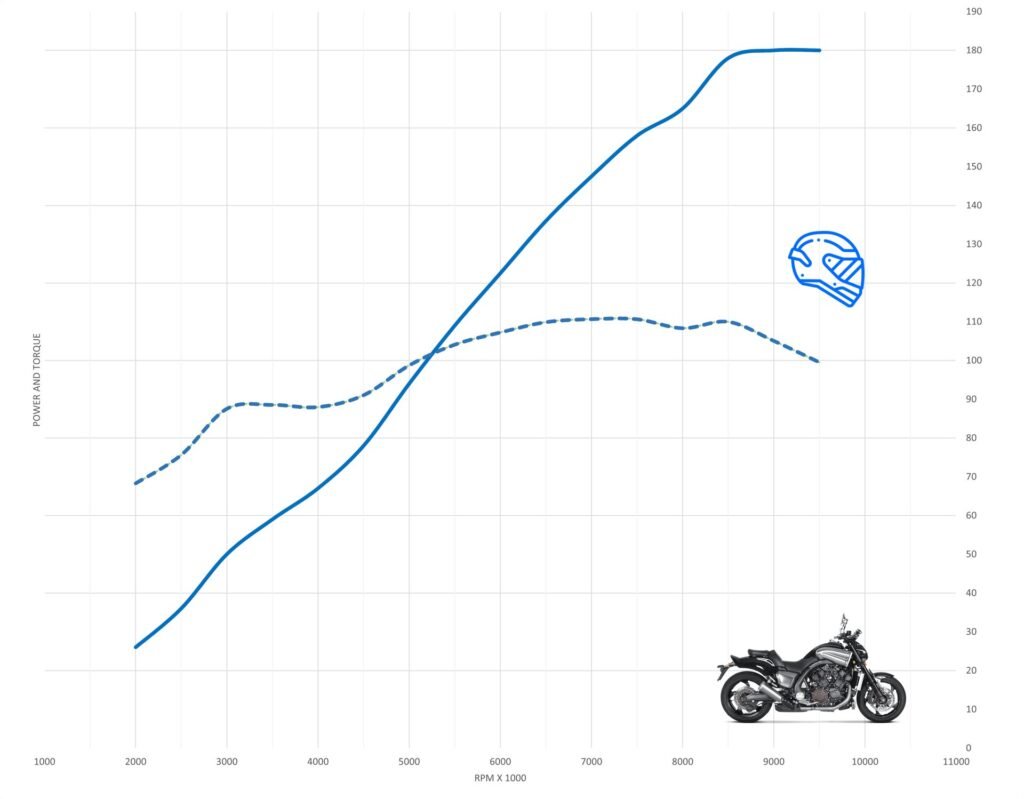 On the dyno this equated to a ‘real’ 180 horsepower and 110 ft/lb of torque transmitted through a shaft drive.

As you would expect from such a large displacement engine making so much power, throughout the rpm range the VMax is not short on engine response and drives well from as low as 2000 rpm.

From 3000 rpm it picks up nicely offering instant acceleration, but the real fun begins at around 4500 rpm where the V-Max’s engine thrust spools up aggressively with the kind of kick one would expect from a Superbike.

As you are riding a cruiser your brain tells you that it’s going to run out of puff but the VMax has not even started yet. Pile on more revs and the VMax provides amazing power all the way to the 9500 rpm which is where that 180 horsepower delivered. 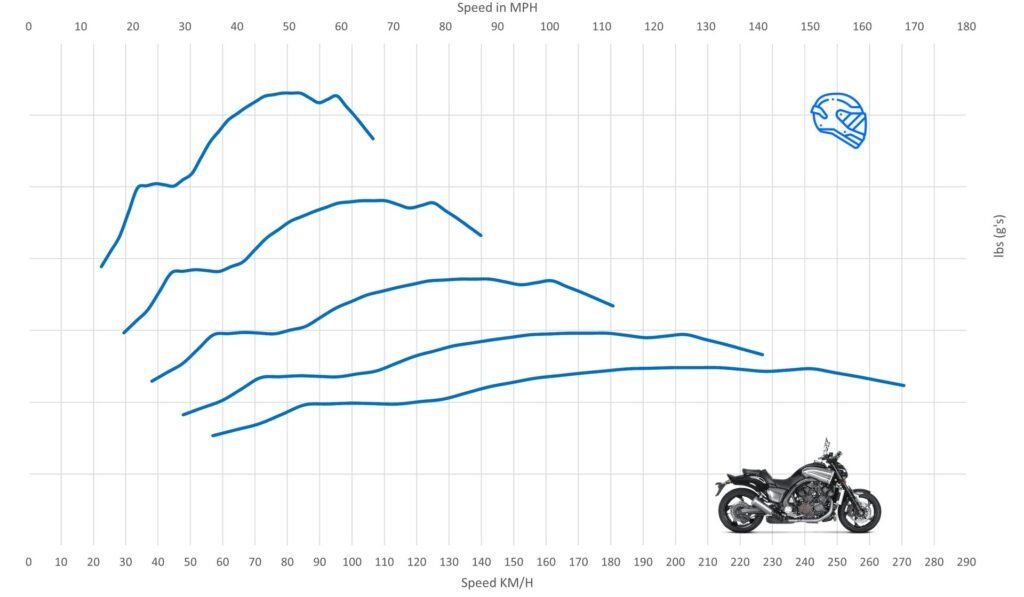 As you’d expect the in-gear acceleration for the VMax is immense considering the size of the engine and the power and torque it makes.

Yamaha opted for a five speed gearbox as with this much brute force the VMax has no need for six gears.

Though in saying that the VMax could benefit with the extra cog as despite making so much power and torque the sheer weight of the V-Max does take the edge of the capability of the engine just a little bit, but nothing you’d really notice or ever complain about.

The V-Max’s in-gear acceleration is very similar to a Diavel just a little more everywhere. If you have ridden a Diavel you’ll have an idea of what to expect, but with more outright power the VMax has the Edge as the speeds get higher. 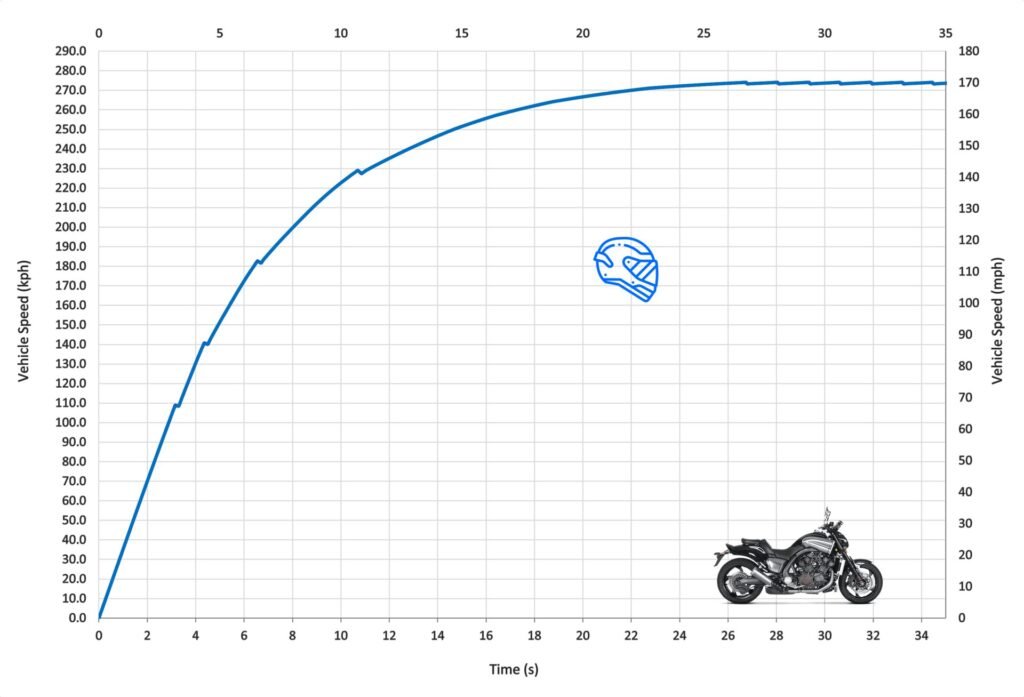 With 180 horsepower at the wheels, you wouldn’t be wrong for assuming that the VMax is fast.

And fast it is, and a great drag bike for upsetting your sport bike riding friends.

Being long, low, and heavy with a rear weight bias and monster power, the VMax can launch very hard. It will indeed wheelie but is more likely to spin its tyres when going for good times.

If you are competent sub three seconds 0-60 mph times are not too difficult but holding on is.

More traditional cruisers are pretty slow after 60 mph but the VMax has not even gotten started as is blasts from 0-100 mph in only 5.44 seconds putting it up there with some of the fastest motorcycles.

By 100 mph those traditional cruisers are approaching their max terminal speed while the VMax is accelerating through third gear and into fourth where it records a 0-200 km/h time in 8 seconds flat.

Right at the top of fourth gear the VMax passes through the Quarter mile in a time of 10.29 and achieving a terminal speed of 140 mph making it faster than a Blackbird. The Yamaha VMax’s top speed is nerfed in many markets to around 140 mph but without this castration, the Vmax – despite its size and poor aerodynamics will hit a top speed of 170.3 mph skimming the rpm limiter in fifth gear.

With a slightly longer ratio the Yamaha VMax could probably hit about 175 mph or so with the most committed tuck.