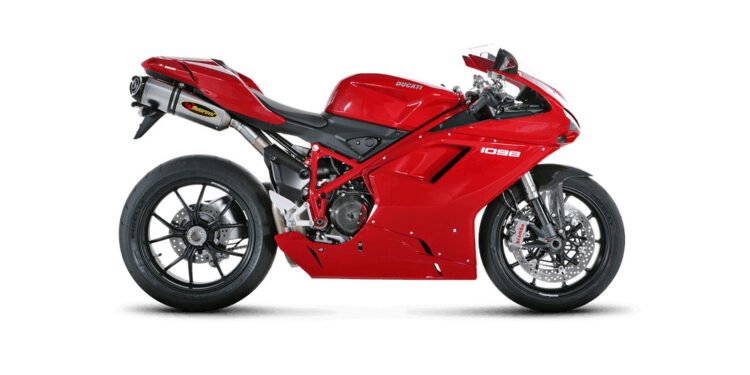 Below, we take a look at Ducati’s 1098 dyno curve, in-gear and outright acceleration through the gears, along with its top speed. 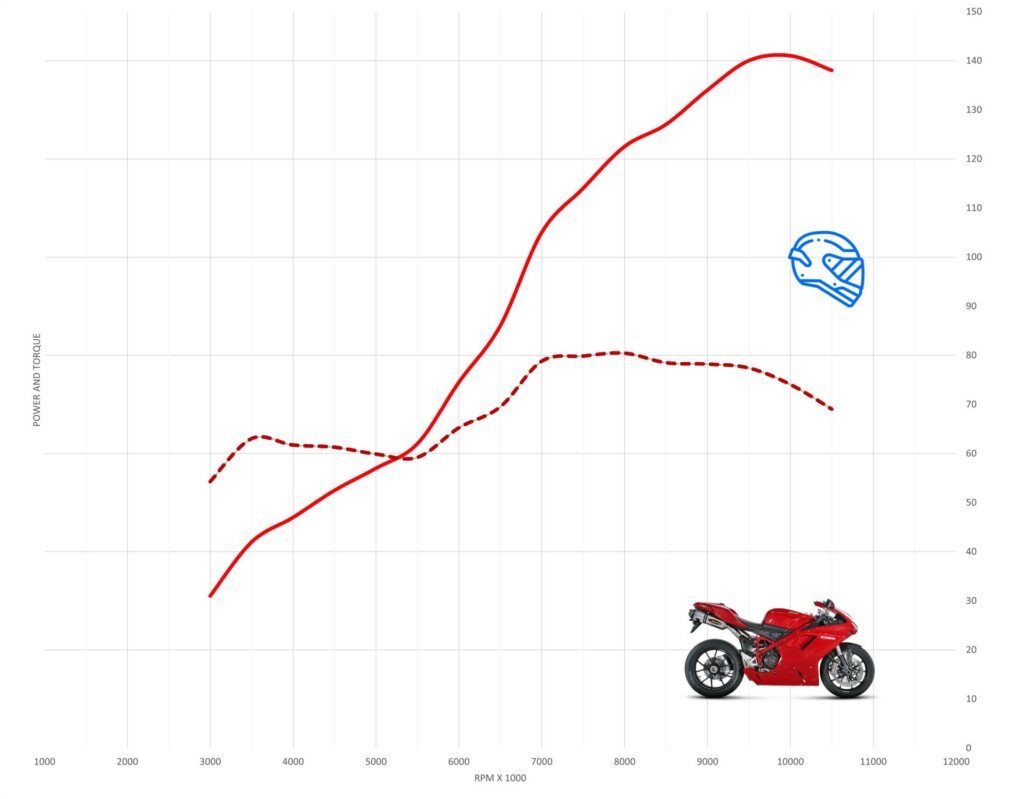 In response to the ever more powerful four-cylinder motorcycles, Ducati’s famous L-Twin configuration grew from 999 cc in the superseded Ducati 999 to 1098 cc for this new model as of 2007.

Ducati needed to bring their new Superbike closer to the competitors of the time as the 999 was outgunned considerably by the litre fours and had Supersport 600s were hot on its heels in terms of straight-line performance.

Despite the 20 horsepower jump over 999 it still was somewhere at the bottom of the class alongside the 06-07 CBR1000RR in terms of peak power but it did make the most torque of all it fought against.

The delivery is very strong with a massive wheelie-inducing hit from 5500 rpm which made for an exciting engine. Off tickover the engine makes great torque but there is a flat spot between 4000 and 5500 rpm. 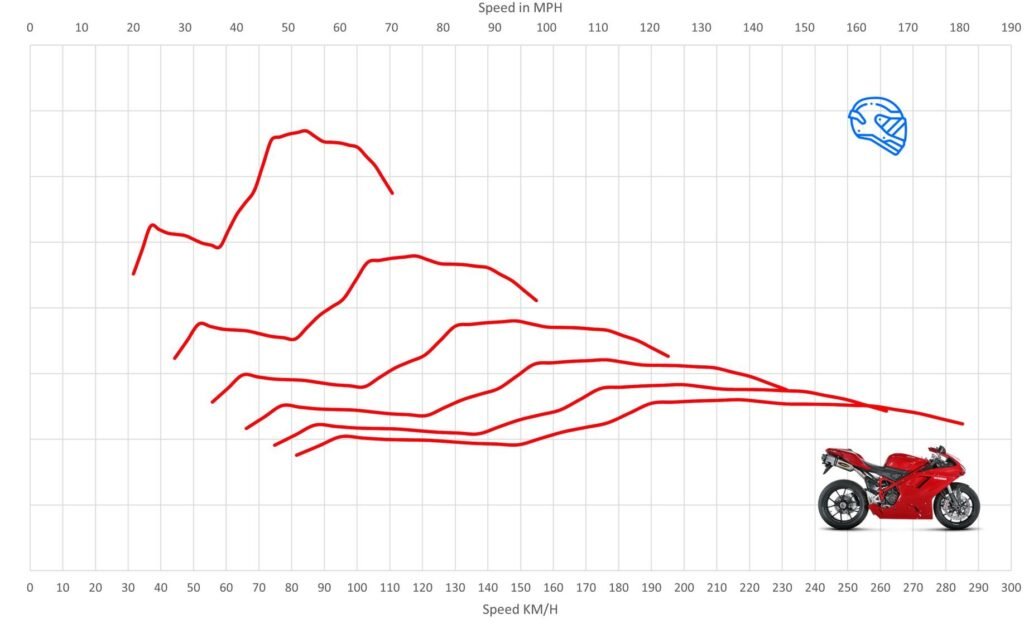 It is noticeable on the road and exaggerated to a degree seeing as the engine picks up so fast from 5500 rpm. Though, the 1098 like many big twins has low gear ratios from 1-3, the lull is very short-lived and not as detrimental as it could be.

From gears four, fifth, and sixth the flat spot is more annoying. It’s not like the 1098 won’t accelerate but against the four-cylinder competitors they’ll clear off from a fourth, fifth or six-gear roll-on if you find yourself on the 1098 between 4000-5000 rpm in those gears.

You may ask how does the 1098 get eaten on a roll if it makes more torque than the fours, well it is all down to gear ratios, and typically big twins run longer fourth, fifth, and sixth gears than the fours because they do not rev as high.

To have a chance of hitting similar top speeds they need longer gearing.

As gears are a multiplier of torque, if the gear is longer than a competitor you have less multiplication of the available engine torque.

Anyway, most 1098 riders would have Termignoni’s or similar fitted, along with a tune with this hole more-than filled with meaty torque making this issue only relevant on a stock bike that has to meet noise and emission regulations. 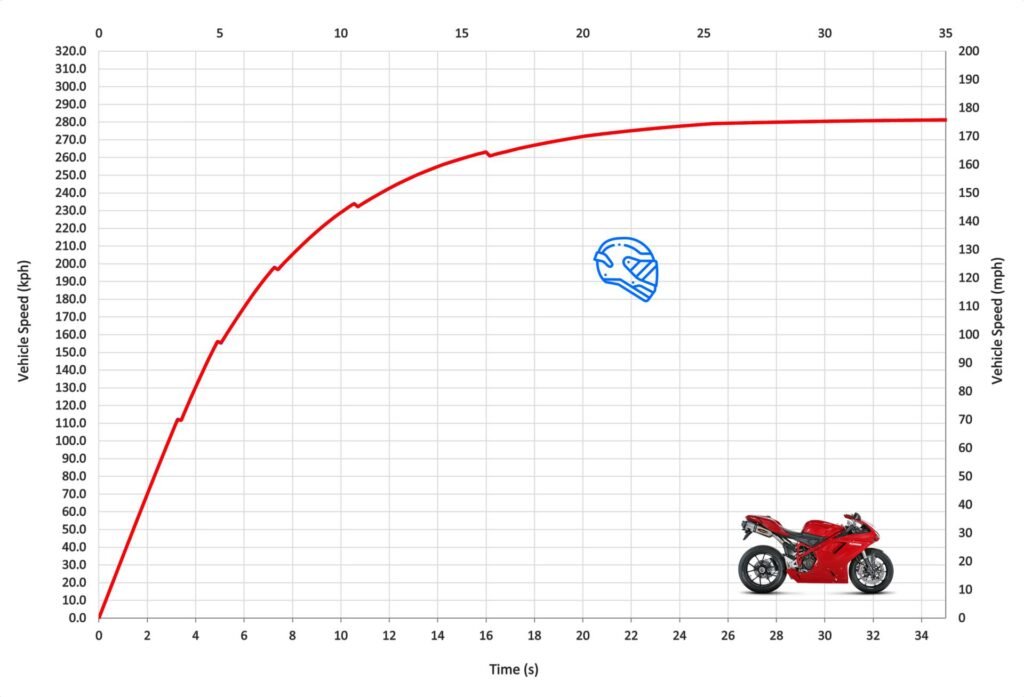 Pretty much any 1000 cc plus Superbike is capable of sub-three second 0-60 mph times.  If Superbikes could put all their power down in first, they’d be doing under two seconds to 60 mph no probs.

Whether a Superbike does a sub-three or a plus three second  0-60 mph time will primarily come down to the rider’s skill, and how easy the said Superbike is to launch, with the variables being varied and plentiful.

The Ducati 1098 is a wheelie machine so launching is hard, this is because it has amazing torque and a low first gear.

Some bikes will bog when you don’t slip the clutch right or provide enough rpm but not the 1098. Even if you drive it from 4000 rpm in first it just takes off and then wheelies as that kick comes at 5500 rpm.

In second gear the 1098 is game to wheelie too but with some good throttle control and a slick clutchless change into third, the 1098 will hit 100 mph in 5.30 seconds putting it up there with the best and even against current bikes today.

The 0-200 km/h time for the Ducati 1098 is achieved in a ballistic 7.60 second putting it up there with some of the fastest motorcycles and cars on the road.

It is from this point forward that the Ducati 1098 is bettered by its four-cylinder peers of the day. Even the older GSX-R1000 from 05 will start to pull away from the 1098 at speeds above 140 mph.

Still, the 1098 is very fast and will have the legs on even a Super Blackbird in terms of acceleration right to 170 mph but will ultimately lose out slightly right at the end of sixth gear as the Ducati 1098 tops out with a maximum speed of 175.5 mph.

Ducati 1098 acceleration through the gears