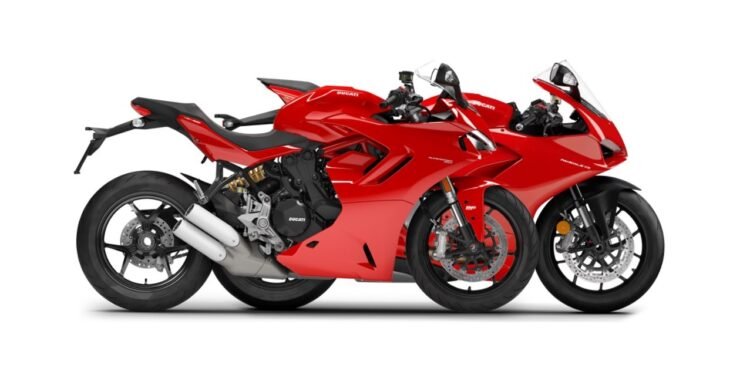 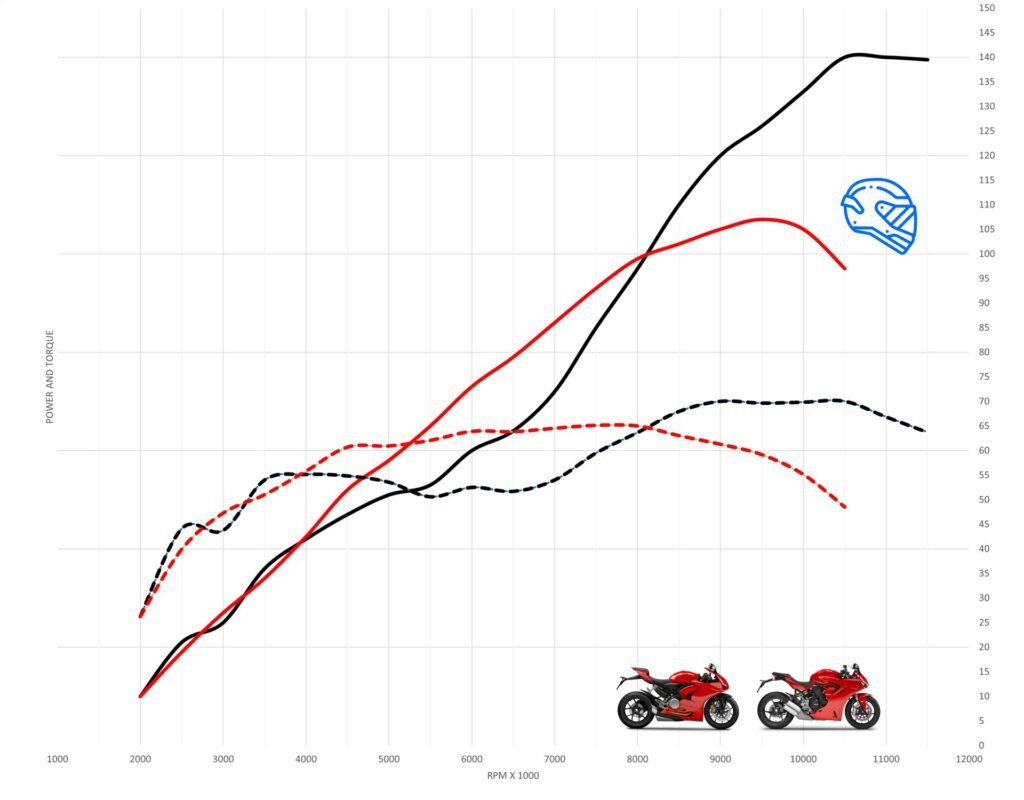 While these two motorcycles are designed for completely different purposes, as they share the same engine configuration and are of similar engine capacity no doubt they will be compared.

We already know which engine is more powerful but the Panigales V2’s peak horsepower advantage does not provide the trouncing that you’d expect in all situations.

Both engines are 90-degree L Twins with the Supersport coming in a 937 cc and the V2 at 955 cc. Very similar on paper but the results on the dyno are very different.

The differences in output and delivery come down to internals but primarily the differing bore and strokes. 94.0 x 67.5 mm for Supersport and 100 x 60.8 for the Panigale V2.

The Supersports longer stoke engine is lower revving and has greater leverage because of the long ‘stoke’ of the two pistons.

The V2 on the other hand is a shorter stoke so less leverage but has a greater potential to spin at higher rpm and thus make more horsepower.

Technically, we could have the Supersport revving harder as there is nothing about the basic configuration that would stop it from producing its power say 1000 rpm higher with an extra 10 or so horsepower but that was never Ducati’s intention.

On the Dyno, both power and torque curves look very different and almost as if capacities and engine configurations were the polar opposite.

There is clearly a gaping hole in the midrange starting from 5000 to 7000 rpm. Much of this is a result of the very short stoke engine that is also further aggravated by strict emissions regulations.

The Supersport on the other hand has a very clean and linear delivery peaking at 107 horsepower at 9500 rpm though does produce less torque laying down 65 ft/lb at 6500 rpm.

You can clearly see that off the bottom both motorcycles trade blows but from 4000 rpm all the way to 7000 rpm the Ducati Supersport produces much more torque than the Panigale V2 despite giving away engine capacity.

The Supersports advantage in the midrange peaks at a whopping 13 ft/lb advantage which is felt on the road.

The V2 is missing engine performance exactly where you want it on the road.  While the V2 ultimately produces more torque than the Supersport  I would not call it a ‘torquey’ engine. 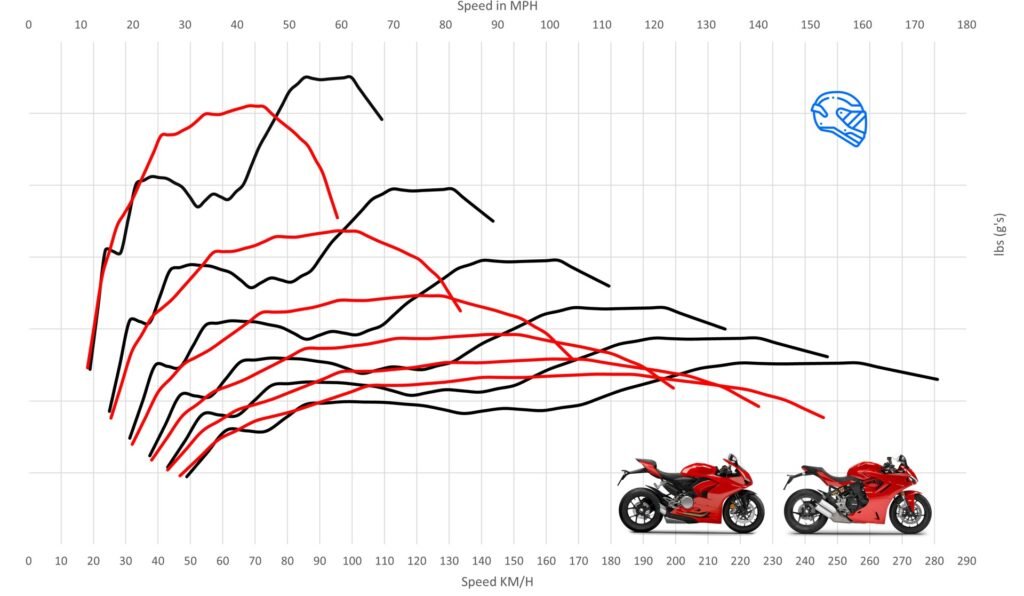 While the Supersport carries around 10 kg more, as it produces more power and torque all the way to 8000 rpm you can clearly see the Supersports advantage in each of the first two-thirds of each gear.

This advantage is helped further by the fact that the Supersport also runs lower gearing than the V2 which you can observe in the gearing table below.

Pretty much at anywhere point below 7000-8000 rpm in any gear, the Panigale V2 feels pretty gutless relative to the Superport.

There are only a few instances at the very start of each gear and at very low rpm where the V2 has the slight edge which can be observed from second to fourth gear.

This advantage is very short-lived though as the V2 quickly falls in that torque blackhole while the Supersport is driving hard courtesy of that meaty midrange grunt.

For example, from 70 mph in sixth gear, the Supersport can out-accelerate the Panigale V2 to 100 mph even if the V2 opts to use fifth gear. The V2 would need to kick down to fourth to beat the Supersport.

While the V2 will overtake slow-moving cars in top gear from 60-70 mph you are felt wanting more, so kicking it down a gear or two is necessary but not so on the Supersport.

Of course, if the V2 is anywhere near between 7000 and 11000 rpm in any gear it will pull considerably harder than the Supersport but you have to ask it first by being in the right gear while the Supersport just responds regardless of gear or rpm.

Thanks to a grunty engine and low gearing, the Supersports performance is much more accessible on the road compared to the V2 which is a motorcycle that requires high rpm and higher moving speeds before you get the performance you expect from a motorcycle making 140 horsepower at the wheel.

On the track though, or on very fast roads things do change and compared to the V2, the Supersport starts to feel a little breathless beyond 8000 rpm while the V2 is just starting to deliver the goods.

In isolation, the top-end pull of the Supersport is just fine. It is when you jump on the V2 with that extra 30 odd horsepower up top does it feel like it could do with some more power.

Each engine clearly demonstrates its purpose and what they are designed for, with the V2 working exceptionally well at high speed and in a track setting while the Supersport excels on the road and in real-world situations pinching from corner to corner while being careless about gear choice. 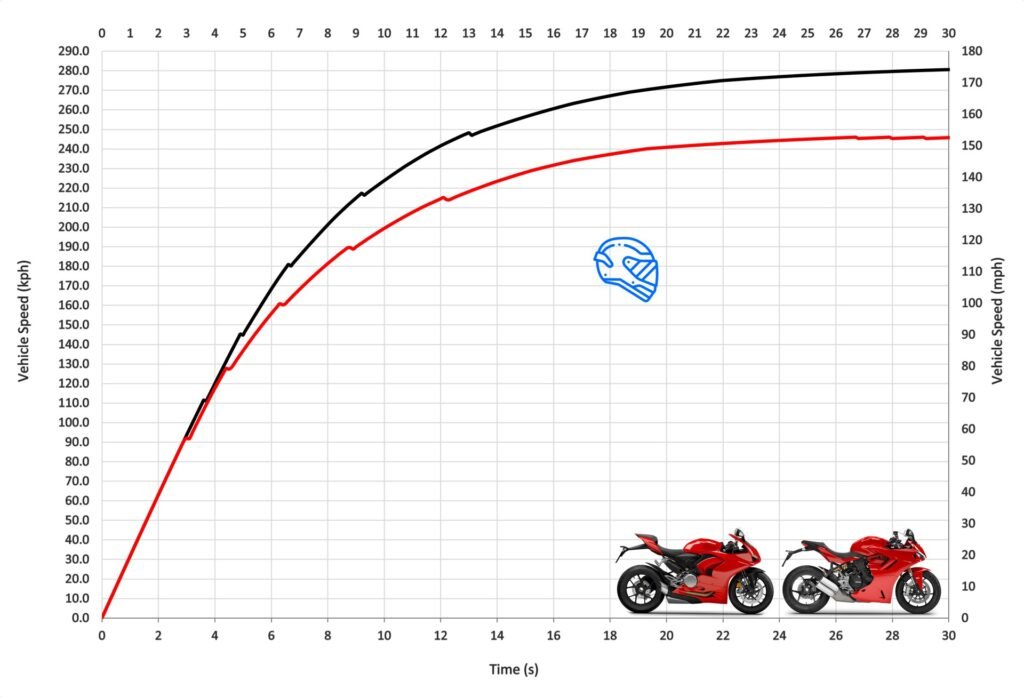 The Panigale V2 is a fair bit faster than the Supersport

When it comes to straight-line performance the Ducati Supersport puts up a good fight against the Panigale V2. Ultimately though, due to giving away 30 horsepower and carrying a little more heft it ultimately loses out.

With so much more power you’d think that the Panigale V2 would have a greater edge, and while it is significantly faster the V2’s advantage only really become obvious once above 100 mph.

Because from 0-60 mph there really is nothing in it despite the V2 Panigale edging with a 0-60 mph time of 3.09 seconds versus the Supersports time of 3.26 seconds.

While both motorcycles are easy to launch most people would get off the line faster on the Supersport, as with all electronics off it is less likely to wheelie and more likely to just drive forward with little fuss as there are no sudden jumps in thrust as is evident on the V2 through first gear.

Once hooking second gear the Panigale V2 will still lift if there are any bumps or if the ground is not completely level with undulations.

The Supersport on the other hand will not wheelie as easily with equally non-flat bitumen once hooking second and will handle these situations easier.

The extra weight helps the Supersport and means that it is more stable and less skittish when launching.

The V2 just beats the Supersport from 0-60 mph

It’s from around 60 mph when the Panigale V2 starts to slowly move away from the Superport as they both approach the ton, with the Panigale V2’s 0-100 mph time coming in at 5.67 seconds which is as fast as any litrebike.

The Supersport is a little under a second behind at this point getting to 100 mph in 6.51 seconds and is just under 10 metres behind the V2.

The power advantage of the Panigale V2 can really take effect through the top of third gear and the remaining gears as it convincingly starts to gap the Supersport.

As the Panigale V2 is just snicking fifth gear it crosses the quarter mile in 10.44 seconds with a terminal speed of 142 mph.

Both are in the 10s though when the Panigale V2 crossed the line it was more than 30 metres in front of the Supersport.

Top speed is much of the same with the Panigale V2 hitting 174 mph and the Supersport a little over 22 mph less at 152.9 mph.

Both have similar aerodynamics though the Panigale provides better protection for the rider from the elements if looking for max top speed potential, but ultimately it is the thirty-plus horsepower advantage that differentiates the two when top speed chasing.