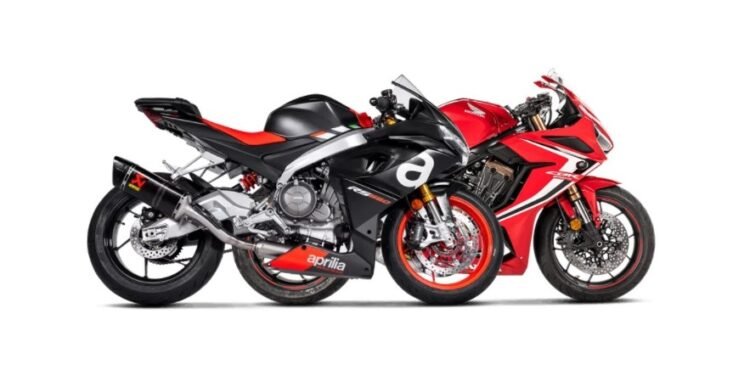 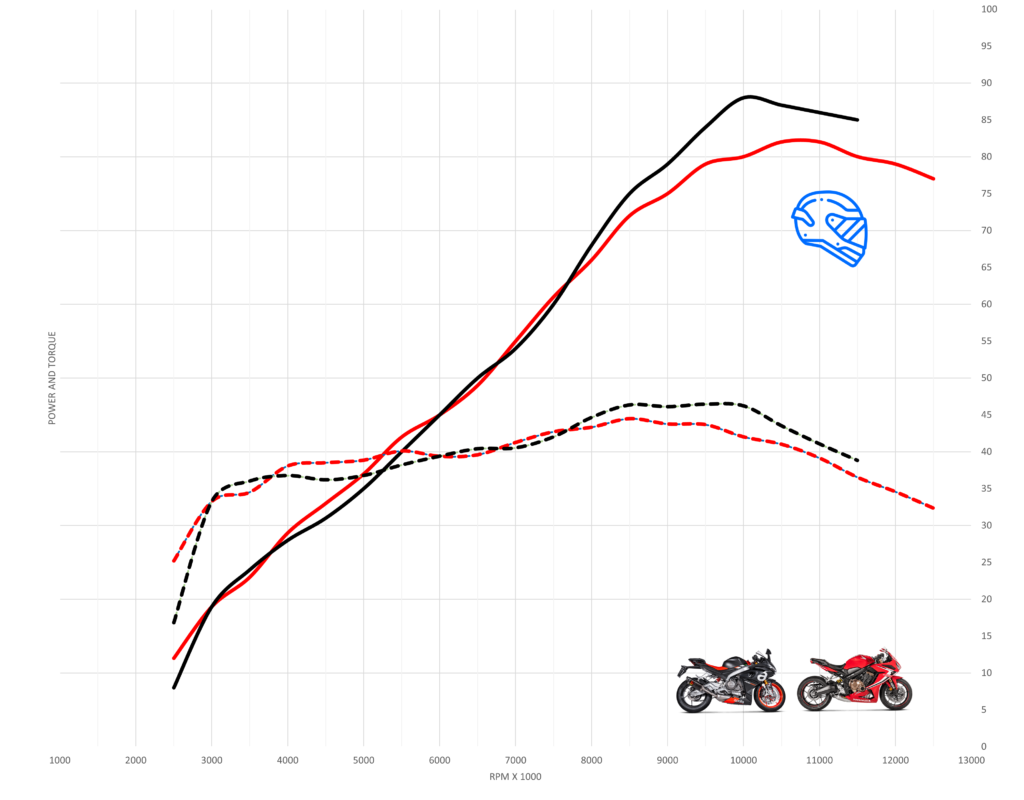 Comparing the engines of these two motorcycles makes for a very interesting comparison. Both the CBR650R and RS 660 displace almost identical engine capacity with the one giving away two cylinders to the other.

It offers up wildly impressive numbers for a small parallel two-cylinder engine and has some thirty-plus horsepower up on rivals such Ninja 650 and Yamaha YZF-R7.

For Aprilia engineers to eke out such an impressive output, what designers have done is used their longstanding RSV4 engine as a base, cutting (not literally) the V4 engine in half to birth a parallel twin.

The bore size is the same as the RSV4 1100, though to increase capacity the stroke is a fair bit longer at 63.93 mm, and not the 52.3 mm of the larger and higher revving V4 engine.

Aprilia could have given us something resembling a 540 cc engine with the same 100 hp but opted for a larger capacity for a more flexible engine that is better suited for the road and its intended purpose.

Like those models from KTM, the RS 660 engine does like to rev and works very well above 7000 rpm while the R7 and Ninja 650 work best below 8000 rpm and become a little breathless the closer you get to their rpm limiters.

The CBR650R’s Supersport-derived engine is a little more focused for the road rather than the track, with a longer stroke and an extra 50 cc over other Supersport 600s.

Some of its peak potential output has been redistributed in the mid and bottom ranges of the rpm which is in line with the sport-road intentions Honda has for the CBR650R.

On the Dyno, the CBR650R produces 82 horsepower and 44 ft/lb though peak power arrives at a little lower than claimed.

It’s a typical power delivery for an inline four of this state of tune, with a relatively flat torque curve that picks up approaching 7000 rpm.

There is that typical four-pot rush we all enjoy from there onward but more sedate and not as long-lasting as a CBR600F4i or RR.

But from around 7500 rpm the RS 660 pulls harder and delivers a bigger top-end hit than the inline-four. This is a little surprising as it’s normally the other way round, though the CBR650R does hold onto its power a little longer as it revs higher 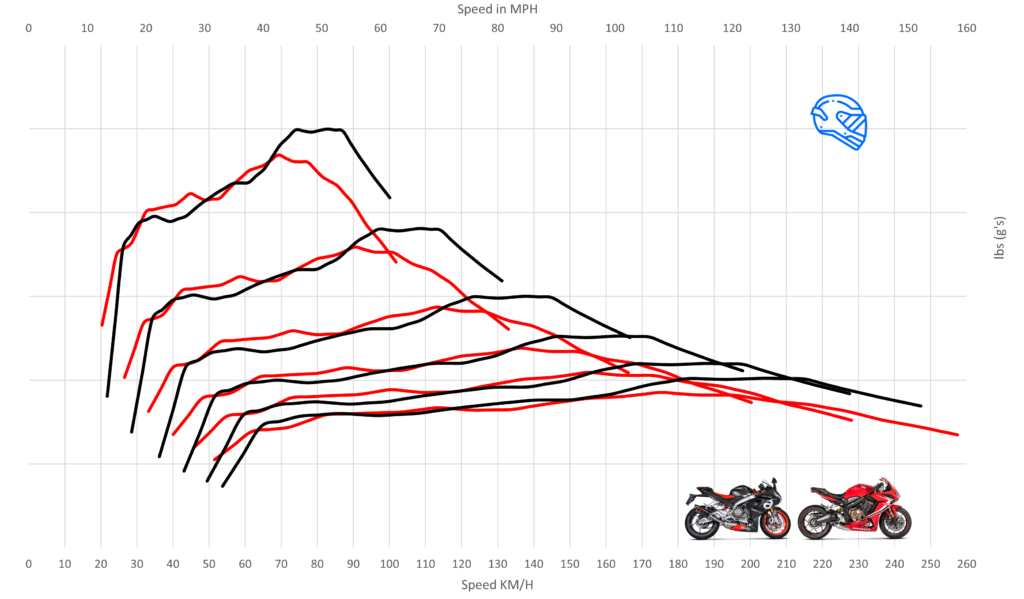 Both motorcycles are close on the dyno, and this is reflected on the road too. If you look at the in-gear acceleration both motorcycles overlay quite closely in gear/speed.

The CBR650R has a slight advantage for most of the speed range of each gear with maybe the exception of sixth gear. Then the RS 660 takes over at the latter part of each gear which echoes what the dyno tells us.

The CBR650R should be a little more ahead than it as it has slightly lower gearing than the Aprilia RS 660 as demonstrated in the bellow table.

The reason why it doesn’t is that the CBR650R comes in a little heavier than the RS 660, so this counteracts the extra thrust and acceleration in-gear as the above thrust curve also takes into consideration the weight of the motorcycle and rider.

While in-gear acceleration is very similar, as the CBR650R has lower gearing it will always be showing a few extra hundred rpm if in the same gear at the same speed as the RS 660 making the Honda feel a little more thrash.

The slight advantage that the CBR650R has in the first two-thirds of each gear is not noticeable on the road and would barely represent a bike length of advantage if both got on the throttle at the same time while in the same gear.

The Advantage that the RS 660 has in the latter part of each gear and when it drives through 7000 rpm is noticeable from the seat and visibly too on the road, as anywhere above 7000 rpm in any gear the RS 660 will put some distance between itself and the CBR650R.

And you can feel it too. While both motorcycles provide a nice rush as their peak torque is delivered, it is more urgent and exciting on the RS 660 driving from 7000 rpm and to their respective top-ends.

For most riding situations though and at lower engine rpm both motorcycle’s in-terms of roll-on capability feel broadly similar with the RS 660 needing less rpm to provide roughly equal acceleration. 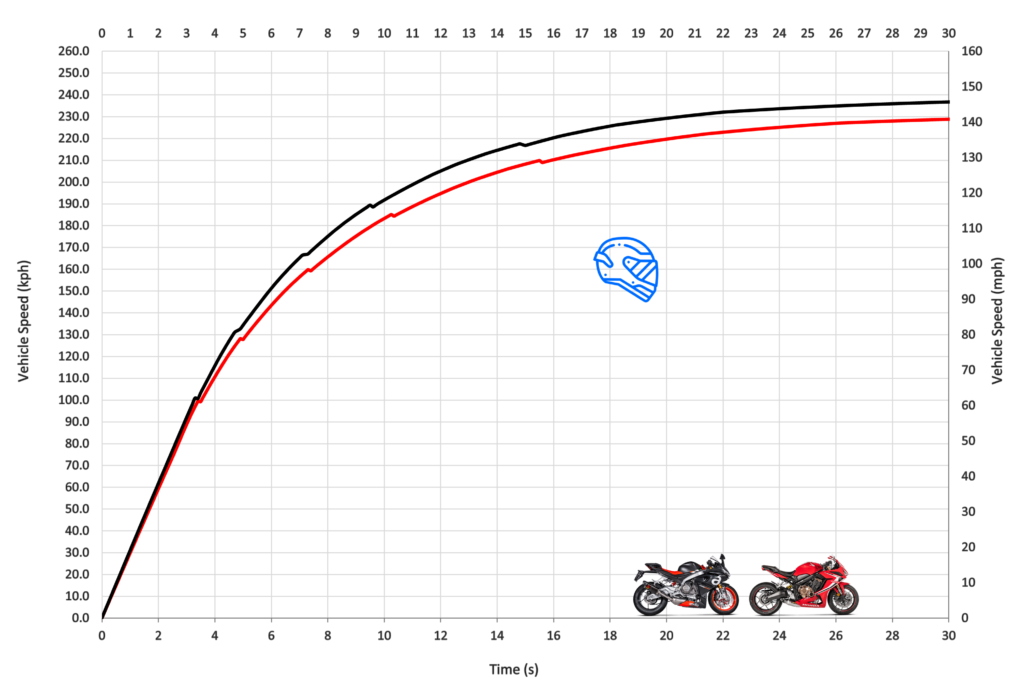 Having more claimed power and slightly less claimed weight the RS 660 was always going to have the edge in the end.

The sprint to sixty mph is very similar between the two with skill and ease to launch being the deciding factor.

The CBR650R is the easier to launch of the two and is less likely to wheelie than the RS 660. Both motorcycles are not particular wheelie prone in first gear unless super aggressive with the clutch.

The CBR650R does not have wheelie control like the RS 660, instead, it is only equipped with a basic TCS system that is more about safety rather than performance. It really should be left off as it will bog your lunch at every attempt.

Pretty much most TCS and wheelie systems – while some are amazing will ultimately hinder your best ETs if you have the skill to not need them.

Anyway, both motorcycles really do not have enough power to really need TCS and wheelie control if only for launches.

The CBRs TCS especially will stop the fun even when the tyre does not spin it seems. The RS 660 has an impressive suite of electronics but is better left off for the most skilled riders and in good conditions.

Honda’s optional quickshifter does the job but is not as fast or as smooth as the RS 660s.

Once into second and not so reliant on rider skill the RS 660’s extra power starts to fashion out a small lead.

The difference while clear is not wide enough that a better launch from a CBR650R rider would not have it win a few in real-world situations. Especially as it is easier to launch. All things equal though RS660 will always win.

If you have the balls or the road to keep them both pinned the Honda CBR650R will hit 144 mph though the Aprilia RS 660 will have the slight edge at 147 mph.

Both motorcycles provide equally bad protection from the elements but the advantage for the screen goes to the RS 660.

They are closely fought and provide very similar engines and straight-line performance. It’s only when you ask them both that the RS 660 will provide that bit extra as it punches harder up top.