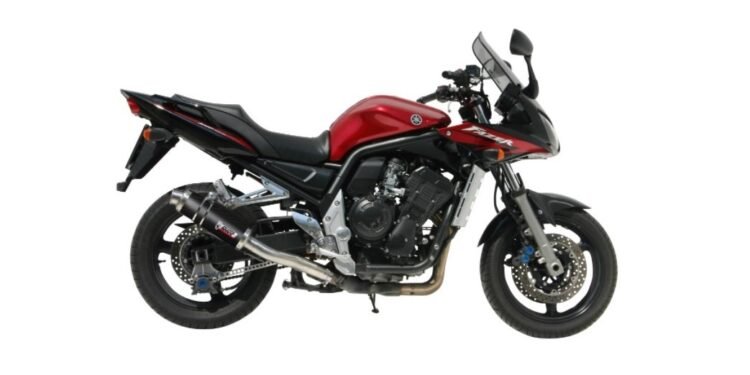 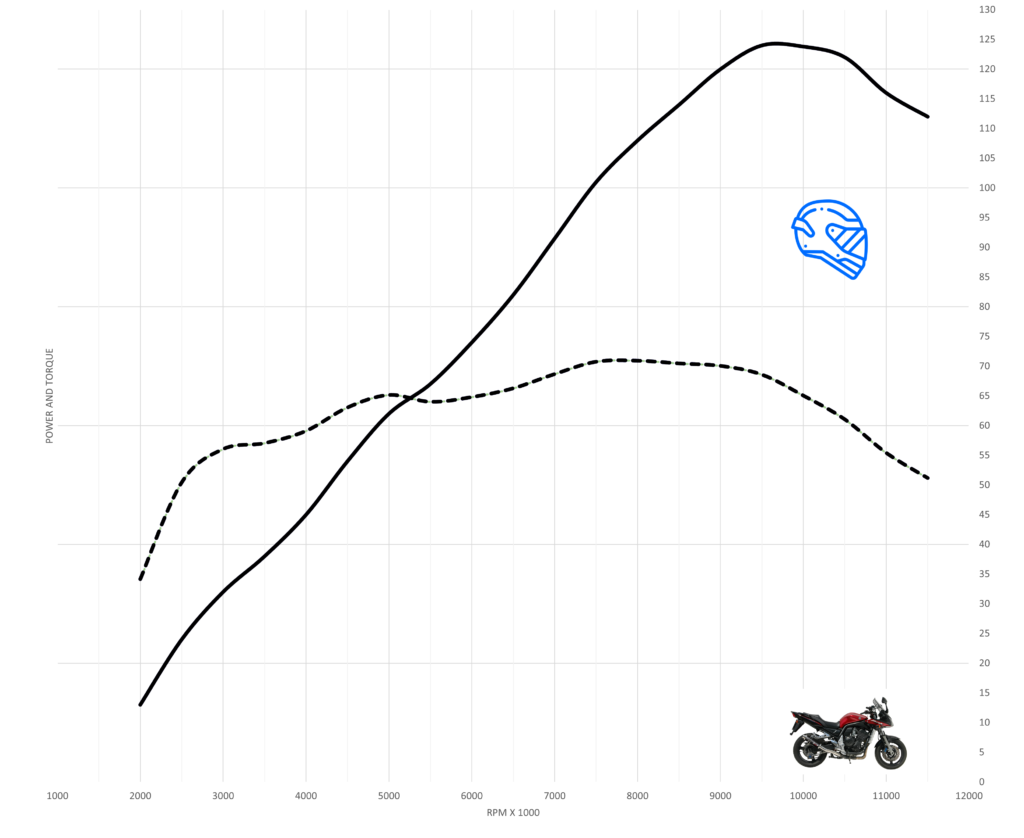 Yamaha’s 01-05 Fazer engine uses the legendary engine from the non-fuel injected generation of the Yamaha R1. This engine at the time was arguably the best engine in a production motorcycle that still impresses today.

The Fazer 1000 engine is not the fully-fledged version and produces a claimed 143 horsepower at the crank as opposed to 150 horsepower of the original and un-fettled donor engine.

To reduce the power the Fazer 1000 engine has a lower compression ratio and smaller 37 mm carbs as opposed to the 40 mm of the R1.

Additionally, the crankshaft is heavier for greater internal inertia which helps with low-end torque output. These modifications were meant to increase low-end power and they do.

On the dyno, things look very similar between the Fazer 1000 engine and the R1 with the Fazer making more power and torque below 5000 rpm. Then the R1 leads in the midrange slightly with the gap widening from 8000 rpm upward.

Up top, there is a real noticeable difference with the Fazer 1000 making 125 horsepower at 9500 rpm whereas the R1 is generally between 130 and 135 horsepower at higher rpm and held onto for a little longer.

Peak torque is 71 ft/lb at 7500 rpm which holds relatively flat to around 9500 rpm. There is plenty of torque low-down from as little as 3000 rpm though the most effective drive occurs

from 4000 rpm and is seamless all the way to silly rpm.

The Fazer 1000 engine is nothing like the 06 FZ1 that replaced it and is better suited to normal riding conditions with no distinct powerband as such, just strong dependable drive much like carby R1 which makes sense. 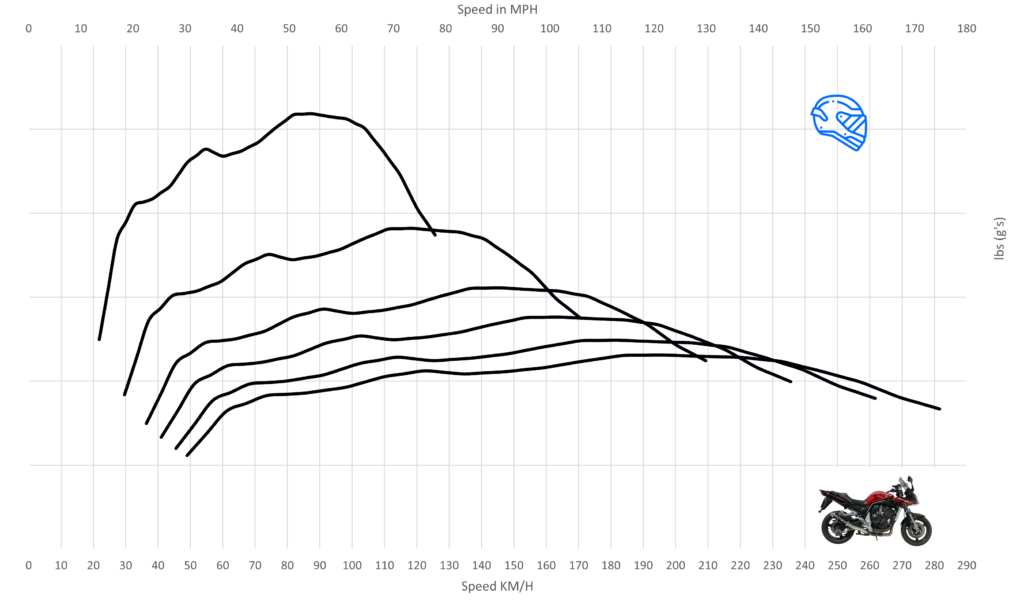 The Fazer 1000 engine may feel very similar in character and how it delivers its go, but being considerably heavier than the R1 it shares its engine with, the Fazer 1000 is not as rapid on pickup in any gear.   This is despite gear ratios being the same with the exception of a slightly longer first gear though the Fazer 1000 does run lower overall gearing courtesy of having a 44 tooth rear sprocket as opposed to a 43.

Despite the above, the FZS 1000 Fazer was known for its instantaneous and strong delivery from its engine in any situation, and this still rings true in isolation though it’s not quite as rapid as I remember.

The above likely has a lot to do with modern and more powerful equivalents tainting my memories.

Regardless, the engine is super strong and smooth. You really do not need to worry about what gear you are in and can even let rpm get quite low in a higher gear and the engine will just drive in a very turbine-like fashion as it builds rpm.

At highway speeds of 70 mph indicates around 4600 rpm on the tacho.

Pretty lazy rpm. Overtaking is from there on is effortless with 100 mph arriving in no time. For some perspective, the Fazer 1000 can match a first-gen Hayabusa from a sixth gear roll all the way to 120 mph where the Hayabusa’s big power takes over. 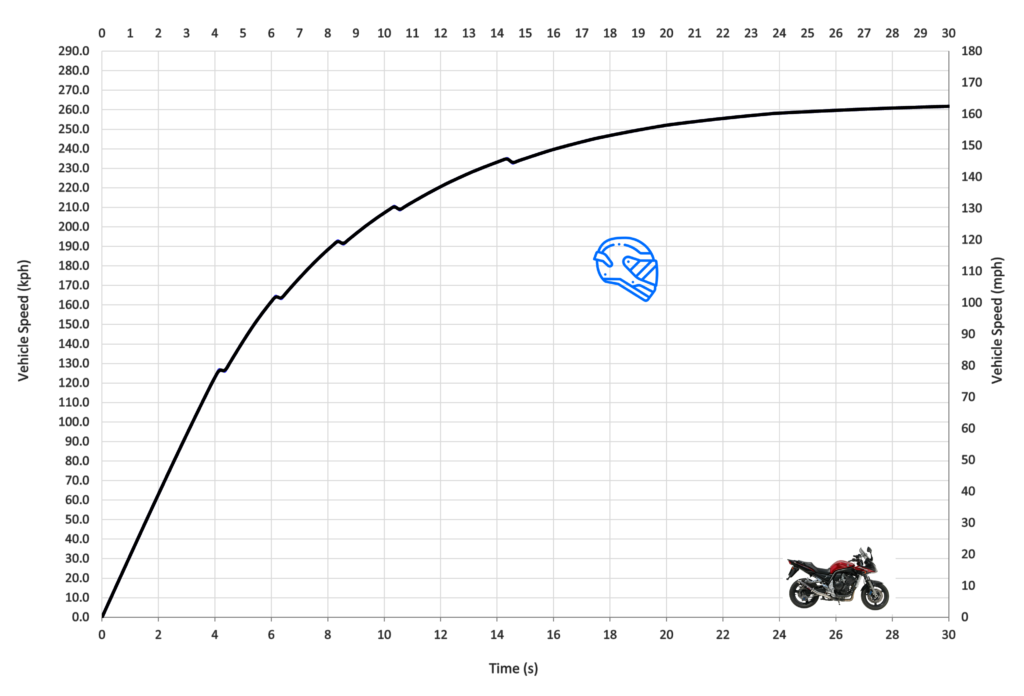 Back in 2001 the Fazer 1000 was probably one the fastest naked motorcycles on the road, offering straight-line performance close to the Superbikes of the day, and it often came out on top of many speed tests with its class rivals.

Even today the Fazer is a very fast motorcycle though it is eclipsed from a dash by many newer naked motorcycles. Even Triumph’s smaller engine Street Triple RS can hassle the Fazer, so things have moved on.

Being heavier and with a longer wheelbase than the R1 it shares its engine, off the line the Fazer is easy to launch despite being full analogue and with no rider aids or throttle restrictions.

You do not have to worry as much about wheelies as you would on a Superbike. Thankfully due to the fantastic carburetion, wheelies can be effectively controlled with a delicate throttle hand, unlike many jerkier FI systems.

The Fazer 1000 only needs second gear to hit the ton. You should stretch first gear out to around 11500 rpm before hooking second, and the Fazer will drive hard and record a 0-100 mph time as fast as many litre Superbikes at only 5.94 seconds.

Like many powerful motorcycles over 600 cc the Fazer 1000 will dip in the tens on the strip with a good launch, and low 11s even if you mess the start.

For best ETs the Fazer 1000 is not too fussy where you shift, though you should use all of your rpm in first gear, then shift at around 10,000 to 10,500 rpm in the ascending gears is the sweet spot.

Above 11,000 rpm from second gear onward and you’ll lose a little time.

This might not sound impressive for a litre bike though we must consider that it’s 20 or so plus kg heavier than a 600 and produces only 10-15 horsepower more at best. Regardless of numbers, it feels fast from the saddle.

The Fazer 1000 is semi-faired, so while not as slippery as Superbike it offers more wind protection for the rider due to it being roomier and having a larger screen compared to the average Superbike.

In good conditions, the Fazer 1000 is a 160 mph motorcycle all day long with the example tested hitting a very impressive top speed of 163 mph!

Top speed can be achieved in fifth gear if taking it as close to the limiter as possible or in sixth with rpm at around 10,600.

The 01-05 Fazer provides sorted 600 Supersport outright acceleration though is quicker from a dig and will match them at the top.

Though unlike the mostly gutless 600s the Fazer 1000 is much more responsive in-gear and will provide much better acceleration from low rpm due to displacing 1000 cc.