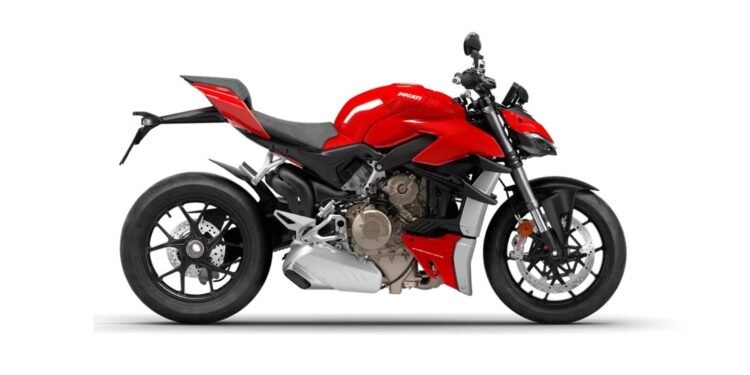 Below, we take a look at the Ducati Streetfighter V4’s 0-60 mph time, quarter mile time,  in-gear and outright acceleration through the gears, along with its top speed. 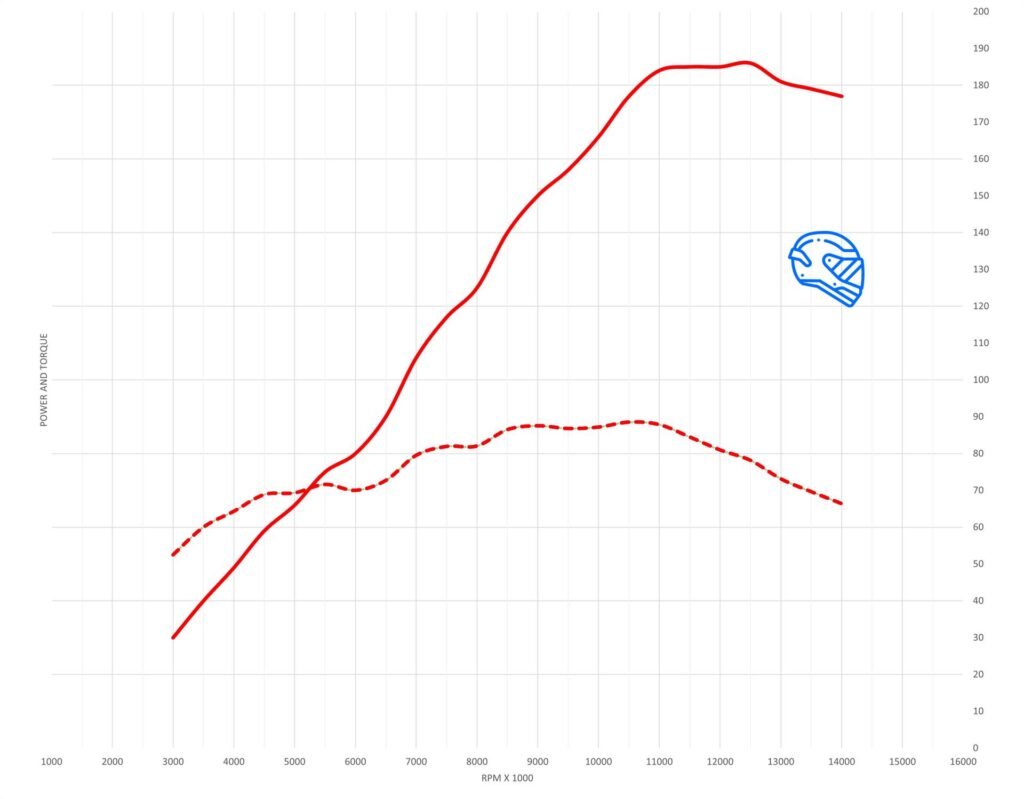 Claimed power is a ridiculous 208 horsepower and 90.4 ft/lb at the crank. Typically for naked variants of flagship Superbikes, we see a less powerful and detuned version of the donor engine, but Ducati claims the same peak figures for the Streetfighter V4 as the Panigale V4.

While the claimed figures are the same, the Streetfighter does seem to make a little less than the V4 and has a slightly different power curve. Perhaps Ducati has opted for different fuelling as the curve does look a little different to the Panigale.

The engine will pull from very low as it produces more than 60 ft/lb from 3500 rpm where it flattens off, then surges hard from 6500 rpm where its sound goes from very L2 sounding to full-blown V4 drone as it hauls ass to 13000 rpm 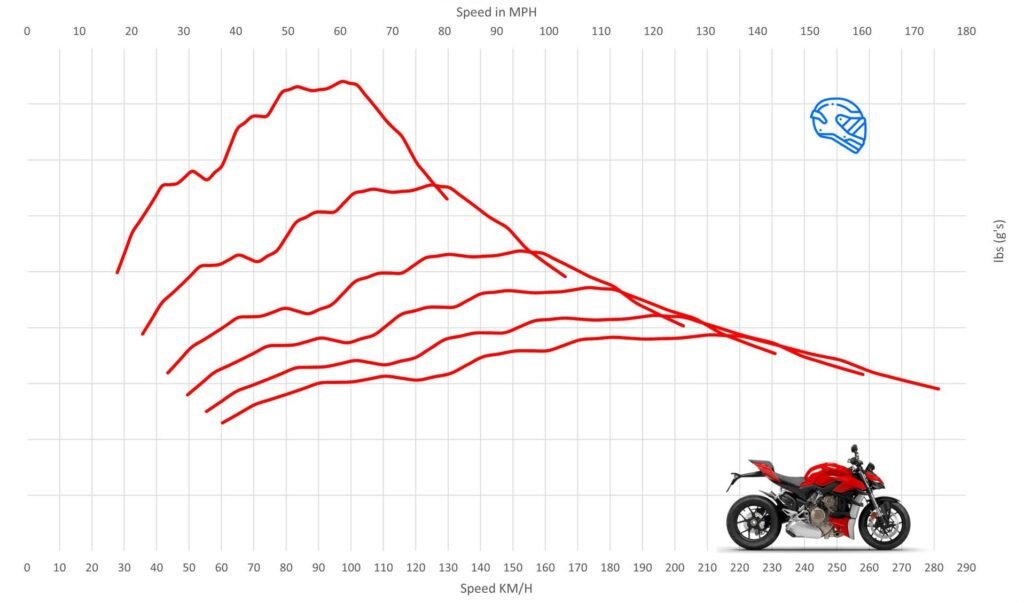 What makes the Streetfighter’s engine even more impressive is that it runs a lower final drive ratio than the Panigale V4, so in-gear acceleration is even more explosive.

The in-gear thrust curve above is a direct calculation of rear wheel torque multiplied by the gear ratio, with the torque taken from the best power run on the dyno.

This is because motorcycles are not dyno’d in the lower gears, typically fourth, fifth or sixth.

If we were to measure thrust in each gear, we would have to run the motorcycle on the dyno in all available gears.

For example, the Streetfighter V4 makes around 167 horsepower in fifth gear so the thrust curve for fifth would be a little lower than the graph suggests. Think of the thrust curve graph being representative if there were no throttle restrictions. Something we do when we flash the ECU.

Either way, restrictions, or no restrictions it is clear that the Streetfighter V4 has one of the most effective engines and is even dealing blows to the Kawasaki Z H2 and the KTM 1290 Super Duke R 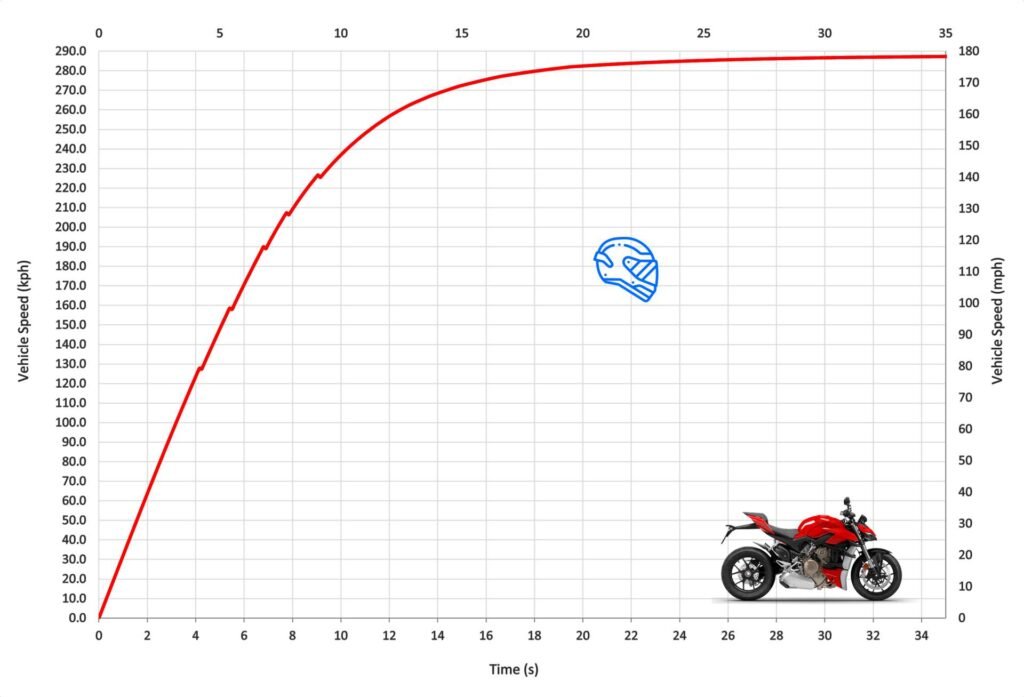 Powered by the Panigale V4’s full-fat 207 horsepower engine, we can expect the Streetfighter V4 to be ballistically fast and arguably the fastest accelerating production naked bike ever to hit the roads.

If you are old enough to remember when the 1998 Yamaha R1 hit the scene, its engine blew everything away with its crazy (at the time) 150 horsepower and 177 Kg dry weight.

Still, to this day the first generation R1 is a fast motorcycle but there are many naked bikes not even at the top of the pile that will match or beat it in some roll-on situations.

Weighing around the same, the V4 Streetfighter would ruin the 98 R1, and even many newer litre bikes anywhere under 170 mph.

It’s to be expected with its 1100 cc V4 but still hard to get your head around having this kind of performance at your disposal from a naked motorcycle.

Let’s look at the numbers.

Off the line, the Streetfighter V4 is pretty much as capable as the majority of powerful naked bikes and Superbikes. This is because all are limited from a dig by their excessive power, lightweight and short wheelbases.

Still, the Ducati Streetfighter can achieve a 0-60 mph time of 2.97 seconds with the wheel barely touching the ground as you try to control wheelies. 0-100 km/h is a fraction later at 3.14 seconds.

As you power through to 100 mph the Streetfighter V4’s front wheel is still looking for the sky even as you hook seconds gear just before 80 mph.

The Panigale V4 is wheelie-happy enough but the Streetfighter V4 is even more keen thanks to its lower final drive gear ratio meaning more thrust at the rear wheel.

The Streetfighter V4 still hits 100 mph in 5.59 seconds and would be quicker still if it could lay its power down.

A lowered and strapped Streetfighter would hit 100 mph in under 5 seconds. If you extended the swingarm even faster yet. This applies to most motorcycles with more than 70 horsepower though.

The Ducati Streetfighter V4 is handy at the dragstrip too and lays down a time of 10.20 at 149 mph meaning it can trade blows with any motorcycle on the market.

With a bit more practice the Streetfighter V4 is definitely capable of a very high nine-second perhaps and breaking the 150 mph barrier in the process.

Being a naked bike top speed is not what their selling point is and is not what people look for when considering a Hypernaked.

We also see naked variants of their fully faired siblings considerably slower as they often make less power and are obviously naked so suffer with poor aero.

It has more in it but it’s not something I would aim for as it’s too painful holding on at those speeds.