by Fabio Rossi
in Motorcycles, Sportsbikes
A A
0 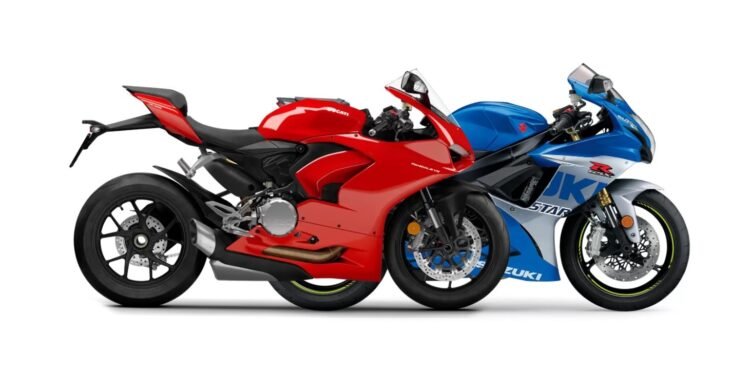 The Panigale V2 Has the edge on the GSX-R750

The Suzuki GSXR-750 and the Ducati Panigale V2 compete in what is a diverse Supersport/Middleweight Class. We compare both motorcycles on the dyno and their straight line performance through the gears. 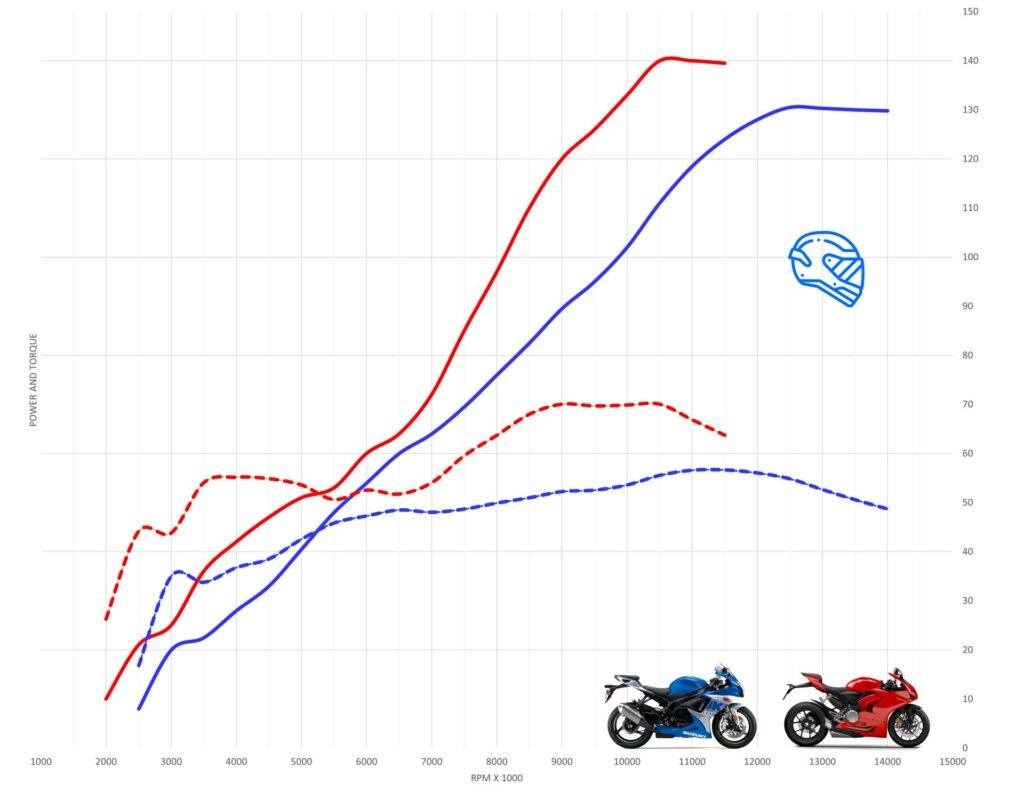 Both the Panigale V2 and the GSX-R750 may compete within the same class but their engines deliver a very different experience courtesy of their very different engine configurations and capacities.

The Ducati Panigale V2 is powered by a 955 cc L2 while the Suzuki GSX-R750 comes equipped with a high revving 749 cc inline-four.

While the numbers on the dyno are similar both motorcycles could not offer a more different in respect of their deliveries. The Panigale has the edge in terms of peak power and torque with an impressive 140 horsepower at 10500 rpm and a punchy 70 ft/lb at 9000 rpm.

The GSX-R750 engine has been constantly tweaked and refined over the years with its latest offering providing 130 horsepower at 12500 rpm and 57 ft/lb at 11300 rpm.

Ducati’s engine delivers its power not like a traditional large capacity L2 as it has a relatively weak midrange and a surging top-end which is an almost two-stroke like. This is compounded more by the flat spot in the power and torque curve between 5000 and 7000 rpm. The delivery is pretty much identical to the bigger sister Panigale 1199 which makes sense as the V2 engine is basically a smaller capacity version of the same engine.

The delivery is certainly exciting and rewards if you feed it high rpm and gears meaning that the engine is at its most comfortable above 7000 rpm where drive is exceptionally strong.

Suzuki’s GSX-R750 has a very different engine and is one of the smoothest in the business.  There are very little peaks and troughs and no powerband as such. The GSX-R750 just provides more go the more your rev the engine but in a very linear and progressive manner. 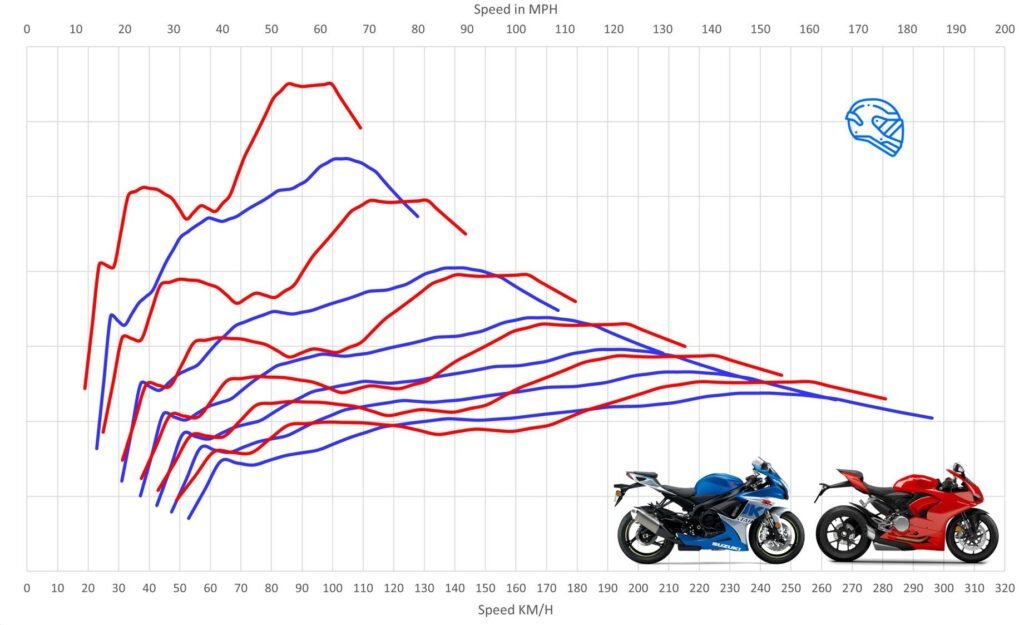 In the company of the V2 though the Suzuki needs to be hovering around 9000 rpm otherwise the Planigale has the edge though if at the stated rpm the GSX-R750 engine delivers exceptional engine.

The bottom and midrange of the Suzuki is adequate but does feel flat in the first three gears compared to the V2, but we can forgive the Suzuki as it gives away more than 200 cc.

If we look at the in-gear acceleration it is evident that the Panigale V2 has a distinctive advantage in all gears and almost all speeds but as we jump up each gear, we can see the Suzuki slightly closes the gap at some speeds and even matches or has the edge in fourth, fifth and sixth gears where that midrange flat-sport of the V2 rears its ugly head. It is short lived though as the Panigale takes command again as its engine drives through that flat spot and into that surge.

The Ducati should have a bigger advantage due to its larger engine capacity and the fact that it produces more torque all the way through the rev range over the GSX-R750.

The GSX-R750 can claw back some of its torque deficit by running lower gearing which you can see below and proportionally the gearing difference becomes larger from third gear onward and this explains why the gGSX-R750 gets closer in terms of in gear acceleration and matches or beats the V2 at certain speeds in the last three gears.

Ultimately though the V2 has the advantage in almost any real-world situations where and will put a good few bikes’ lengths gap between itself and the GSX-R750 from almost any roll-on situations. The Suzuki would often need a gear lower to stay with the V2.

In fifth gear though the Suzuki if accelerating from 70 mph/110 km/h can take a few bike lengths lead but as both bikes hit 110 mph the V2 starts to catch and pass the GSX-R750 and then clears off. Same in sixth gear but just starting from slightly higher speeds. 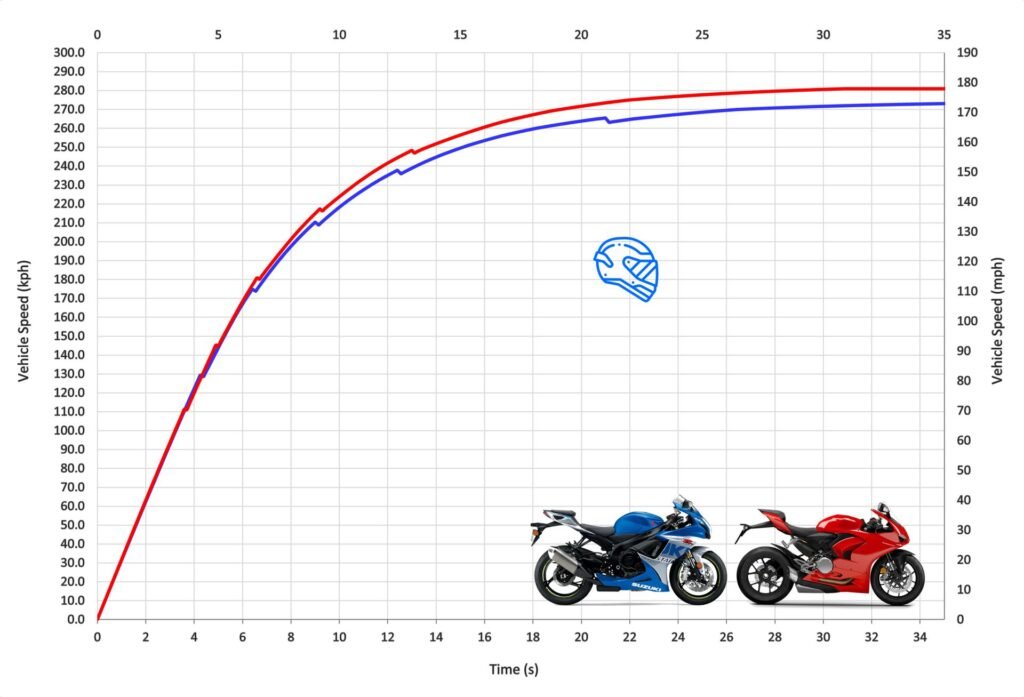 Ducati Panigale V2 VS Suzuki GSX-R750 Acceleration though the gears

The GSX-R750 and the Panigale V2 may offer very different engine characters and in-gear acceleration but their outright acceleration through the gear is very similar.

While the Panigale offers much more in-gear thrust in first and second the GSX-R750 can get very close as in first gear the V2 can’t put all its power to the ground due to wheelies if wheelie control is off.

The GSX-R750 despite having lower gearing can actually reach higher speeds in first and second gear thanks to its ability to rev past 14000 rpm vs the Panigale V2’s 11000 rpm or so. The Panigale has a 70 mph first gear and would need second gear to accelerate from that speed while the GSX-R750 can hit around 80 mph.

The Panigale V2 needs third gear to hit 100 mph while the GSX-R750 can manage it in second. Therefore, the Suzuki pretty much is as quick as the V2 to 100 mph with rider skill really being the deciding factor.

Passing through 100 mph it is still incredibly close between the two with the sprint to the quarter mile arriving at 10.44 at 142 mph hour for the Panigale V2! The Suzuki closely following with a very impressive time of 10.58 at 138 mph.

It’s only really from 140 mph onward where the Ducati Panigale V2 starts to assert itself as it slowly starts to walk away from the GSX-R750 with a 1.8 second advantage from 0-160 mph and a more-tan 10 second advantage to 170 mph which is pretty much dead-on the top speed of the Suzuki GSX-R750.

The Panigale V2 will go on to a top speed of 174 mph if you hold on for long enough.